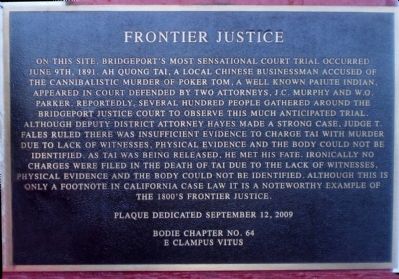 By Lester J Letson, September 10, 2010
1. Frontier Justice Marker
On the front of Ken's Sporting Goods brick building.
Inscription.
Frontier Justice. . On this site, Bridgeport's most sensational court trial occurred June 9th, 1891. Ah Quong Tai, a local Chinese businessman accused of the cannibalistic murder of Poker Tom, a well known Paiute Indian, appeared in court defended by two attorneys, J.C. Murphy and W.O. Parker. Reportedly, several hundred people gathered around the Bridgeport Justice Court to observe this much anticipated trial. Although Deputy District Attorney Hayes made a strong case, Judge T. Fales ruled there was insufficient evidence to charge Tai with murder due to lack of witnesses, physical evidence and the body could not be identified. As Tai was being released, he met his fate, ironically no charges were filed in the death of Tai due to the lack of witnesses, physical evidence, and the body could not be identified. Although this is only a footnote in California Case Law, it is a noteworthy example of the 1800's frontier justice. . This historical marker was erected in 2009 by Bodie Chapter 64, E Clampus Vitus. It is in Bridgeport in Mono County California

Topics and series. This historical marker is listed in these topic lists: Asian Americans • Native Americans. In addition, it is included in the E Clampus Vitus series list. 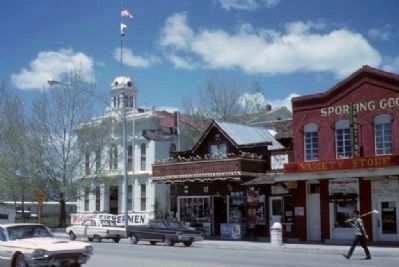 By Unknown, circa about 1966
2. Kens Sporting Goods
A picture of Ken's Sporting Goods from about 1966 based on the Thunderbird in the lower left of the picture. Ken's has been in the same location in Bridgeport since 1931. The plaque was mounted 43 years after this picture and would be located just behind the man crossing the street. The upstairs of the brick building was used as the Justice Court in 1891 when the Tai hearing was held.
, on the right when traveling west on Main Street. Touch for map. Marker is at or near this postal address: 258 Main Street, Bridgeport CA 93517, United States of America. Touch for directions.

Regarding Frontier Justice. Several hundred angry and armed Piute Indians threatened to burn down the town if anyone interfered and took custody of Tai in front of the saloon. They dragged him away and killed him. Tai was buried in Sinnamon's field, but a month later his long braided queue was brought to local rancher "By Day" by his dog. The queue of Ah Quong Tai was put on display in the Fairmont Hotel in San Francisco by lawyer W. H Metson. It has since disappeared.

Also see . . .  The By Day Legacy. A Mono County Historical Society newsletter article detailing the Day Family. It describes the trial and the finding of Ah Quong Tai's queue by Day's dog. (Submitted on November 7, 2010.) 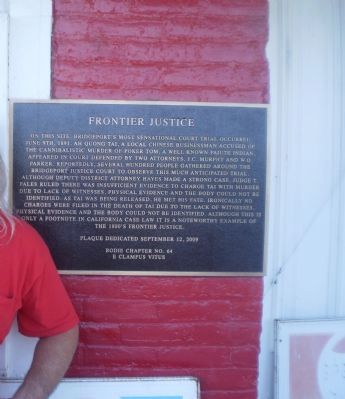 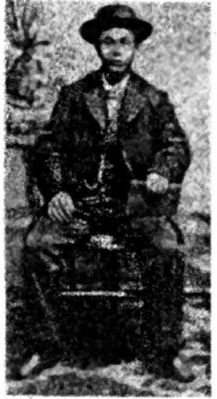 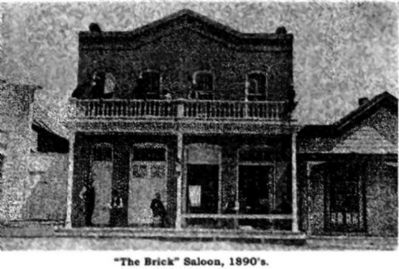