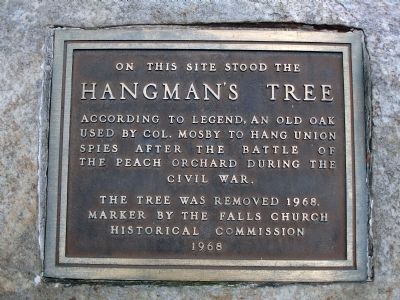 On this site stood the

According to legend, an old oak
used by Col. Mosby to hang Union
spies after the Battle of
The Peach Orchard during the
Civil War.

The tree was removed 1968.
Marker by the Falls Chruch
Historical Commission
1968

Topics. This historical marker is listed in this topic list: War, US Civil. A significant historical year for this entry is 1968.

Other nearby markers. At least 8 other markers are within walking distance of this marker. Virginia Training School (about 300 feet away, measured in a direct line); Cherry Hill (about 500 feet away); Falls Church Home Front (about 600 feet away); Living in Fear (about 700 feet away); Big Chimneys 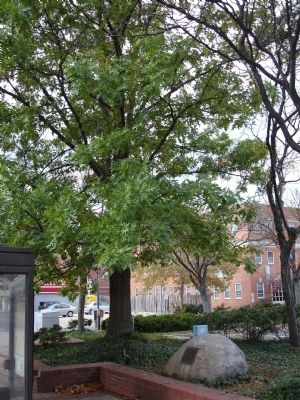 Additional commentary.
1. The Battle of the Peach Orchard
According to local tradition, there was a Civil War skirmish in a nearby Cherry Hill Farm peach orchard.
— Submitted November 6, 2010.
2. Chronology Problem with the Marker
The "Battle of the Peach Orchard" was a running 2-3 month skirmish between Union and Confederate pickets in the peach orchards on Munson's Hill between the time of the Union retreat from Manassas in July 1861, and the Confederate withdrawal from Northern Virginia to Centreville in September 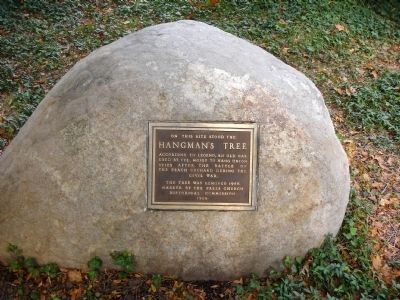 Mosby organized his rangers in 1863, after the CSA Partisan Ranger Act of 1862, i.e., Mosby couldn't have been hanging "spies" from trees in Falls Church in 1861 after Johnston ordered the withdrawal to Centreville in September 1861. So, the "legend" referenced in the marker is just that: a legend.

There was definitely a big tree there, however. A picture from the 1940s is available here, and it was clearly a very, very big tree (see "Falls Church History: The Hangman’s Tree" link above)
— Submitted July 23, 2014, by Brian Cubbage of Alexandria, Virginia.
Credits. This page was last revised on June 16, 2016. It was originally submitted on November 6, 2010. This page has been viewed 1,993 times since then and 38 times this year. Photos:   1, 2, 3. submitted on November 6, 2010. • Craig Swain was the editor who published this page.
Share this page.