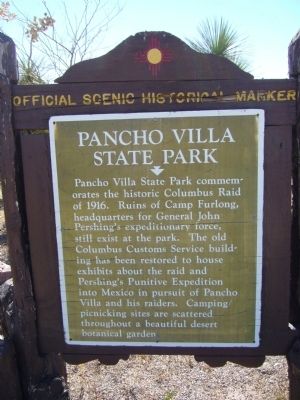 Pancho Villa State Park commemorates the historic Columbus Raid of 1916. Ruins of Camp Furlong, headquarters for General John Pershing's expeditionary force, still exist at the park. The old Columbus Customs Service building has been restored to house exhibits about the raid and Pershing's Punitive Expedition into Mexico in pursuit of Pancho Villa and his raiders. Camping/picnicking sites are scattered throughout a beautiful desert botanical garden.

Topics. This historical marker is listed in this topic list: Parks & Recreational Areas. A significant historical year for this entry is 1916.

Other nearby markers. At least 8 other markers are within walking distance of this marker. Last Hostile Action by Foreign Troops (within shouting distance of this marker); United States Custom House (about 600 feet away, measured in a direct line); In Memory of Citizens Killed / In Memory of Thirteenth Cavalry (about 600 feet away); a different marker also named Pancho Villa State Park 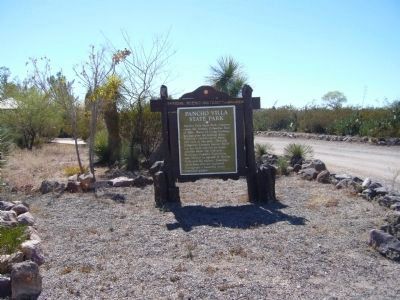 Regarding Pancho Villa State Park. Much speculation abounds concerning General Villa's motivation behind the Columbus raid. One theory suggests it was an act of retaliation. Embroiled in a civil war, Mexico searched for leadership. A dispute broke out between Pancho Villa and Venustiano Carranza when Villa refused to acknowledge the authority of the new president, Carranza. To add insult to injury, President Wilson aided Carranza by allowing Mexican troops to be transported on the El Paso- Southwestern Railroad through Texas and New Mexico to a campaign in Mexico. These additional troops helped defeat Villa and his army in the battle of Agua Prieta, across from Douglas, Arizona on November 1, 1915. Possibly the attack on Columbus occurred as retaliation for the shipment of troops, since the village had an El Paso - Southwestern depot. Amazingly enough however, the depot only sustained light damage from 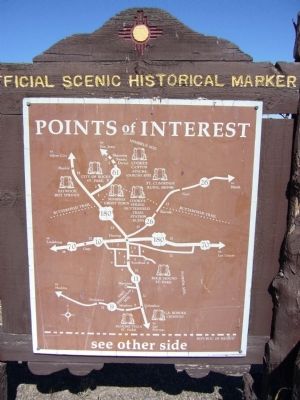 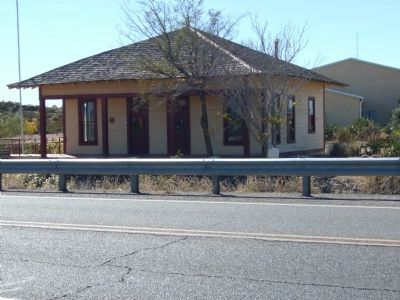 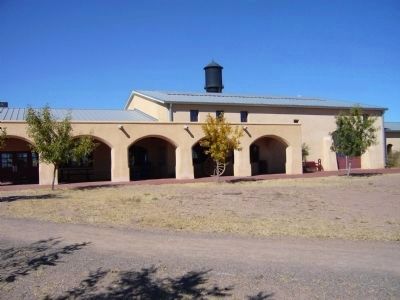