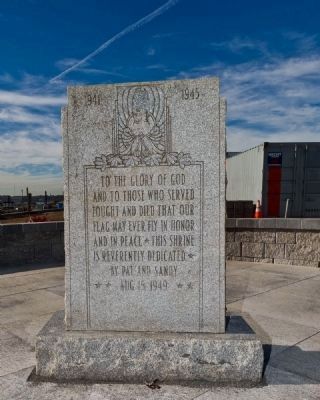 Photographed By R. C., November 13, 2010
1. Breslin War Memorial Marker Returned to Belmar, NJ Original Location
Inscription.
Breslin War Memorial. To the glory of god and to those who served fought and died that our flag may ever fly in honor and in peace. This shrine is reverently dedicated by Pat and Sandy Aug. 15, 1949 . This memorial was erected in 1949 by Pat and Sandy Breslin. It is in Belmar in Monmouth County New Jersey

To the glory of god and to those who served fought and died that our flag may ever fly in honor and in peace. This shrine is reverently dedicated by Pat and Sandy Aug. 15, 1949

Erected 1949 by Pat and Sandy Breslin. 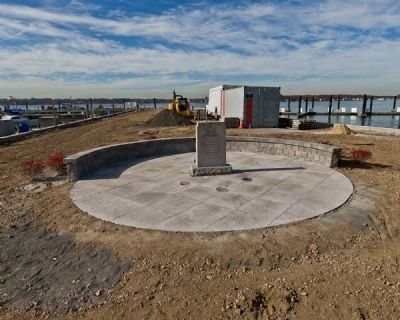 Click or scan to see
this page online
(approx. 1.7 miles away); Presbyterian Church (approx. 2.4 miles away). Touch for a list and map of all markers in Belmar.

More about this memorial. Due to the upcoming closure of Fort Monmouth, New Jersey, this memorial was removed from its Ft. Monmouth location and returned to the Borough of Belmar, New Jersey. It has been relocated on the same pier area that was once occupied by Pat and Sandy.

Regarding Breslin War Memorial. Dedicated at Fort Monmouth on April 25, 1961, the stone monument memorializes those service members "who did not return" from war. The story of how the monument came to Fort Monmouth is below.

The day after the attack on Pearl Harbor, two private citizens, Pat and Sandy Breslin, wrote Congress that they desired to volunteer their services and the facilities of their boating and fishing pier for use by members of the Armed Forces. There were no strings attached to the offer and men and women were welcome to enjoy the Breslin hospitality without charge.

For 16 years Pat and Sandy played host to countless members of the service. They provided food, fishing tackle, bait, and boats. This generous couple, by absorbing the expense of telephone calls, often encouraged these soldiers to call their families. Many of these young people were undergoing military training at Fort Monmouth.

In April 1957, the Breslins' lease was not renewed. This was a crushing blow to these two kind people, but they were most concerned with the War Memorial they had erected in honor of those who 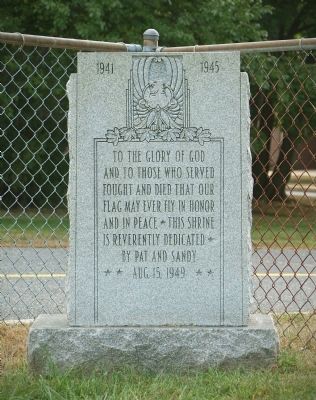 October 5, 2007
3. Breslin War Memorial Marker
In Fort Monmouth, New Jersey before being returned to it original location.
served but did not return. With so many problems confronting them at the time, they accepted a local offer to store the monument without charge. In Sept 1960, Pat and Sandy wrote to President Eisenhower about their soldiers' memorial. The President notified the Department of Defense, who brought the matter to the attention of the Army.

It was at this point that Major General William D. Hamlin, Commanding General, Fort Monmouth, NJ, was asked if he would agree to have the memorial placed at Fort Monmouth. General Hamlin promptly agreed to do so, providing Pat and Sandy approved. They did.

These individuals recieved thousands of letters and souvenirs from service men and women from all over the world. They visited with the President in 1953, and recieved personal medals from Cardinal Spellman in 1954. They also were inserted in the Congressional Record in recognition of their efforts to better the morale of servicemen. 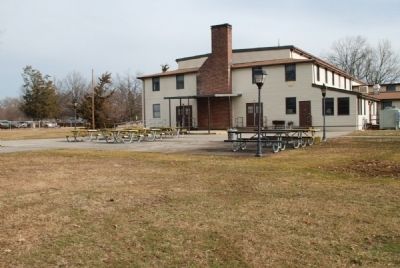