The First Hundred Years are the Hardest 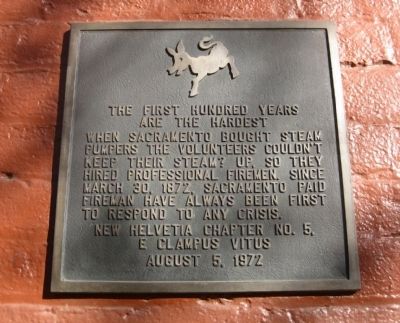 By Andrew Ruppenstein, March 13, 2010
1. The First Hundred Years are the Hardest Marker
Inscription.
The First Hundred Years are the Hardest. . When Sacramento bought steam pumpers the volunteers could not keep their steam? up, so they hired professional firemen. Since March 30, 1872, Sacramento paid firemen have always been the first to respond to any crisis. .
New Helvetia Chapter No. 5, . E Clampus Vitus . August 5, 1972. . This historical marker was erected in 1972 by E Clampus Vitus, New Helvetia Chapter No. 5. It is in Sacramento in Sacramento County California

When Sacramento bought steam pumpers the volunteers could not keep their steam? up, so they hired professional firemen. Since March 30, 1872, Sacramento paid firemen have always been the first to respond to any crisis.

Topics and series. This historical marker is listed in these topic lists: Heroes • Notable Buildings. In addition, it is included in the E Clampus Vitus series list.

Other nearby markers. At least 8 other markers are within walking distance of this marker. The Dunn Mansion (about 400 feet away, measured in a direct line); First United Methodist Church (approx. 0.2 miles away); California State Indian Museum (approx. 0.4 miles away); Site of the Ridge Home - Sacramento's First Mercy Hospital 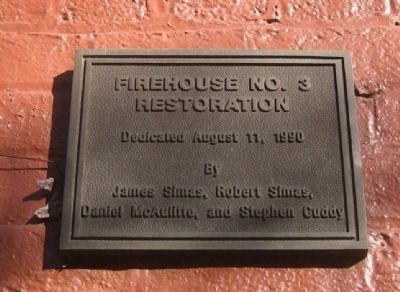 By Andrew Ruppenstein, March 13, 2010
2. Restoration plaque
Mounted above the main marker is a plaque marking the restoration of the firehouse, reading:

Also see . . .  National Register of Historic Places in Sacramento. The Sacramento Old City Association's page for NRHP properties in Sacramento. On Firehouse No. 3:"Fire Station Number 3 is one of two nineteenth century firehouses remaining in Sacramento. It was the oldest firehouse in use in the city when it was closed in 1982. Constructed in 1893 Fire Station Number 3 served the city west of Alhambra Boulevard for nearly a hundred years. The Firehouse is a two story brick building designed in a Classical Revival style. These classical design elements can be seen in the building’s symmetry, form, pediments, and decoration. The entry façade contains two bays, both two stories in height, which project slightly from the front. Classically inspired pediment, fire department symbols, and the decorated friezes are among the best in the city. Rusticated stonework around the building suggests 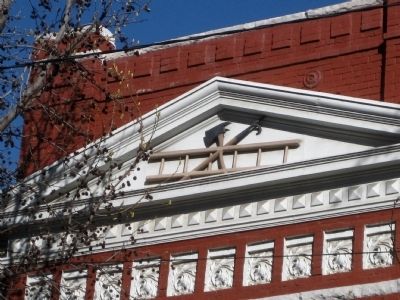 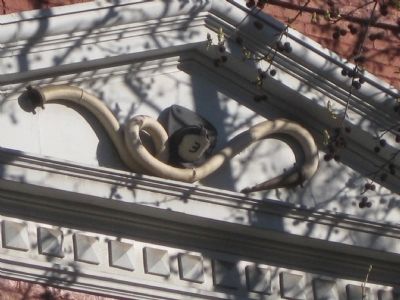 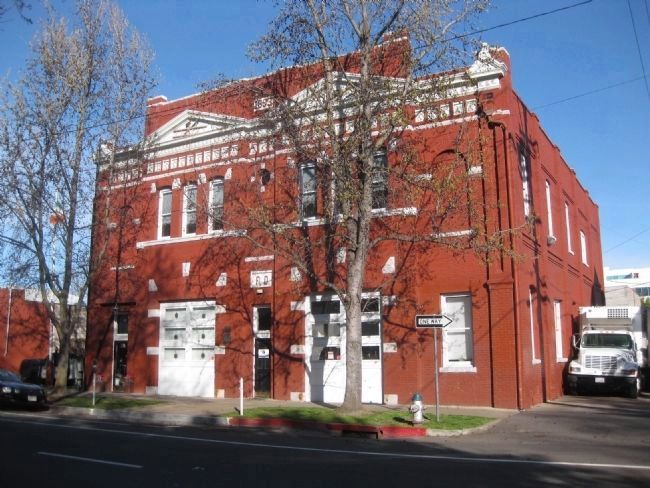