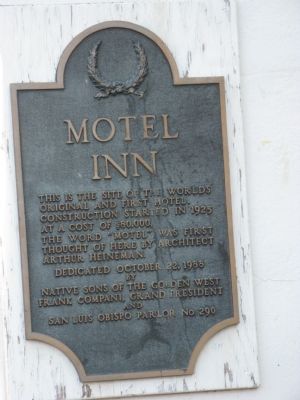 Photographed By Syd Whittle, November 27, 2010
1. Motel Inn Marker
Marker is mounted at what was the entrance to the building. The area is now fenced off and may only be viewed from beyond the fence.
Inscription.
Motel Inn. . This is the site of the worlds original and first motel. Construction started in 1925 at a cost of $80,000. The word “motel” was first thought of here by Architect Arthur Heineman. . This historical marker was erected in 1988 by Native Sons of the Golden West, Franklin Compani, Grand President and San Luis Obispo Parlor No. 290. It is in San Luis Obispo in San Luis Obispo County California

This is the site of the worlds original and first motel. Construction started in 1925 at a cost of $80,000. The word “motel” was first thought of here by Architect Arthur Heineman.

Topics and series. This historical marker is listed in this topic list: Industry & Commerce. In addition, it is included in the Native Sons/Daughters of the Golden West series list. A significant historical year for this entry is 1925.

Other nearby markers. At least 8 other markers are within one mile of this marker, measured as the crow flies. M60A3 (TTS) Main Battle Tank (approx. 0.3 miles away); San Luis Obispo Creek (approx. 0.8 miles away); Dallidet Adobe (approx. 0.9 miles away); The Ramona Hotel Depot 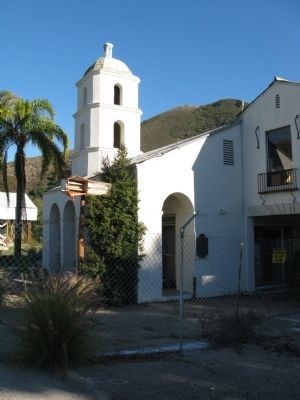 2. First Motel in the World in San Luis Obispo, California. The first motel in the world is located in San Luis Obispo, California. In the era of the car travel, vacationers can now drive to their destination and spend the night in something that offers a bit of comfort and convenience. Welcome to the 20th century and its concepts of driving in a car on your vacation. There were no SUV nor RV's yet. Folks either had to find traditional hotels, or camp out. (Submitted on November 27, 2010.) 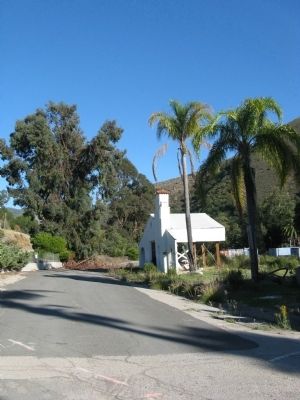 Photographed By Syd Whittle, November 27, 2010
3. The Other Remaining Building 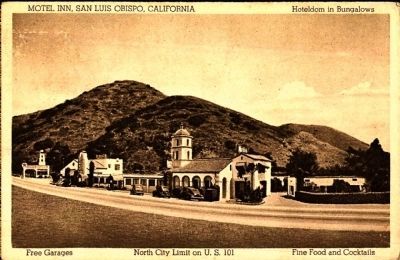 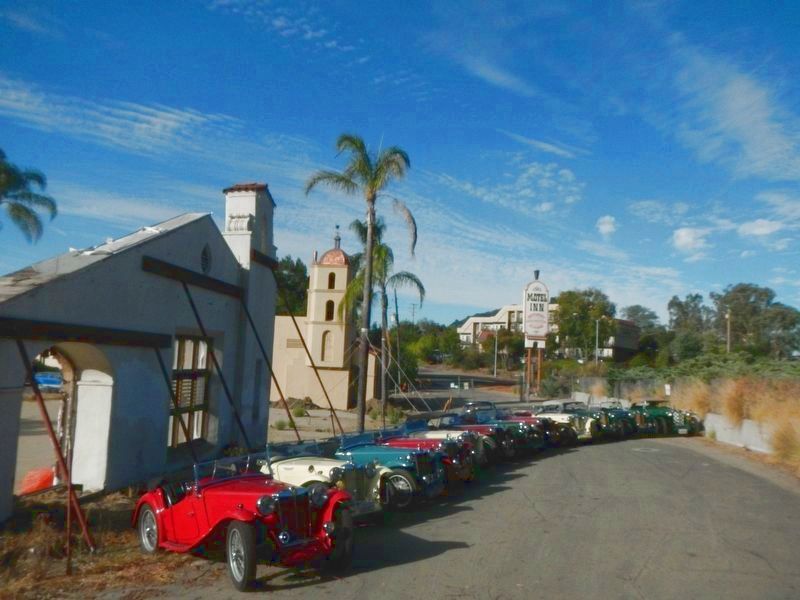 Photographed By Barry Swackhamer, October 9, 2016
5. ARR/TCMG lineup in front of what remains of the Motel Inn
For sixty years two MG-TC clubs, the Abingdon Roughriders (ARR) from the San Francisco Bay Area and the TC Motoring Guild (TCMG), from Southern California, have been meeting approximately half way in between for their annual conclave. In 1957 the first conclave was held at the Motel Inn.
Credits. This page was last revised on November 23, 2016. It was originally submitted on November 27, 2010, by Syd Whittle of Mesa, Arizona. This page has been viewed 689 times since then and 20 times this year. Photos:   1, 2, 3. submitted on November 27, 2010, by Syd Whittle of Mesa, Arizona.   4. submitted on January 5, 2015.   5. submitted on November 23, 2016, by Barry Swackhamer of Brentwood, California.
Share this page.