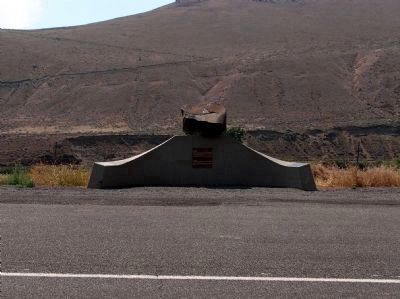 Photographed By Paul Crumlish, July 31, 2010
1. Beck Memorial
From the east bank overlooking the Yakima River with the Umtanum Anticline in the background. The memorial is topped with a block of basalt.
Inscription.
Beck Memorial. . Fiery Floods
Twenty-five million years ago, this area was a land of meandering streams and lush, rolling hills. Then came the first lave flow. Long cracks or vents opened in the earth and lava flooded the land spreading like water. The lava cooled and solidified into basalt. Lakes, swamps and streams reformed on the new, relatively flat surface. Then lava again flooded the land. The time between lava flows was sometimes only months; sometimes hundreds, even thousands of years. Each eruption reset the clock in a cycle that continued for 15 to 20 million years.
The layers of basalt visible in the valley walls are part of the largest lava fields in the world. It covers over 200,000 square miles in Washington, Oregon and Idaho and is reported to be over 10,000 feet thick in places.

Dedication
This monument is dedicated to Professor George Beck, who for many years taught geology at Central Washington University in Ellensburg. Funds were provided by Yakima residents who have been interested in the teachings of Professor Beck.
This project was coordinated through the Washington Parks Foundation and erected with cooperation of the Department of Transportation and the Washington State Parks and Recreation Commission.

Umtanum Anticline
(Folded Mountains)
Toward the end of the lava flow cycle, the land began to rise forming the Cascade Mountains. Over millions of years of, tremendous pressure from beneath the earth’s crust warped the flat basalt layers of this area into hills. In the geological structure directly ahead, known as the Umtanum Anticycle, the basalt layers were folded by the immense, slow pressure.
The Cascade Mountains have changed the climate of the Columbia Basin to a semiarid plain. The Cascades form a barrier to the moist winds from the ocean.