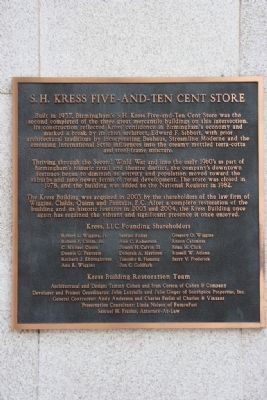 Built in 1937, Birmingham’s S. H. Kress Five-and-Ten Cent Store was the second completed of the three great mercantile buildings on this intersection. Its construction reflected Kress’s confidence in Birmingham’s economy and marked a break by its chief architect, Edward F. Sibbert, with prior architectural traditions by incorporating Bauhaus, Streamline Moderne and the emerging International Style influences into the creamy mottled terra-cotta and steel-framed structure.

Thriving through the Second World War and into the early 1960’s as part of Birmingham’s historic retail and theatre district, the company’s downtown fortunes began to diminish as activity and population moved toward the suburbs and into newer forms of retail development. The store was closed in 1978, and the building was added to the National Register in 1982.

The Kress Building was acquired in 2003 by the shareholders of the law firm of Wiggins, Childs, Quinn and Pantazis, P.C. After a complete restoration of the building and its historic features in 2003 and 2004, the Kress Building once again has regained the vibrant and significant presence it once enjoyed. 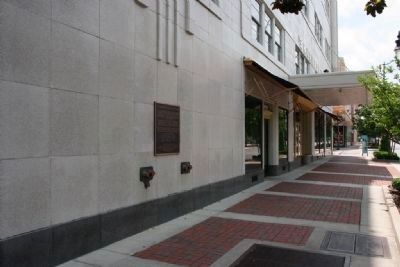 Photographed By Tim & Renda Carr, May 22, 2010
2. S. H. Kress Five-And-Ten Cent Store Marker
Marker located on the 19th Street Side of the building.

Topics. This historical marker is listed in this topic list: Notable Buildings. A significant historical year for this entry is 1937.

Other nearby markers. At least 8 other markers are within walking distance of this marker. Shutting Down Downtown (here, next to this marker); S.H. Kress Store Building (a few steps from this marker); Woman in Paddy Wagon 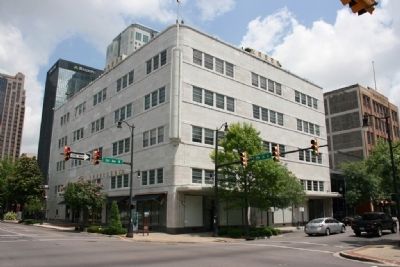