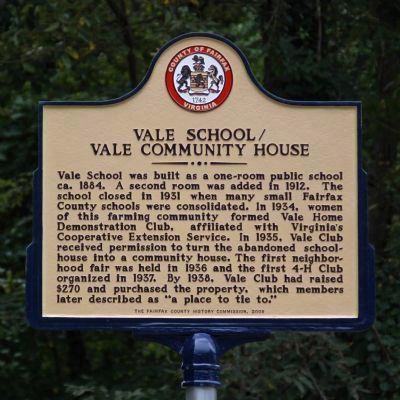 Photographed By Carol Cross
1. Vale School / Vale Community House Marker
Inscription.
Vale School, also, Vale Community House. . Vale School was built as a one-room public school ca. 1884. A second room was added in 1912. The school closed in 1931 when many small Fairfax County schools were consolidated. In 1934, women of this farming community formed Vale Home Demonstration Club, affiliated with Virginia’s Cooperative Extension Service. In 1935, Vale Club received permission to turn the abandoned schoolhouse into a community house. The first neighborhood fair was held in 1936 and the first 4-H Club organized in 1937. By 1938, Vale Club had raised $270 and purchased the property, which members later described as “a place to tie to.” . This historical marker was erected in 2009 by The Fairfax County History Commission, on October 17.. It is in Oakton in Fairfax County Virginia

Vale School was built as a one-room public school ca. 1884. A second room was added in 1912. The school closed in 1931 when many small Fairfax County schools were consolidated. In 1934, women of this farming community formed Vale Home Demonstration Club, affiliated with Virginia’s Cooperative Extension Service. In 1935, Vale Club received permission to turn the abandoned schoolhouse into a community house. The first neighborhood fair was held in 1936 and the first 4-H Club organized in 1937. By 1938, Vale Club had raised $270 and purchased the property, which members later described as “a place to tie to.”

Erected 2009 by The Fairfax County History Commission, on October 17.

Topics and series. This historical marker is listed in these topic lists: Agriculture • Education. In addition, it is included in the Virginia, Fairfax County History Commission series list. A significant historical year for this entry is 1884. 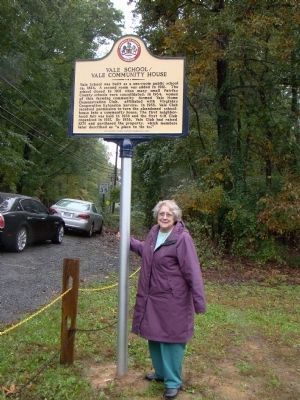 Photographed By J. J. Prats, October 17, 2009
2. Mrs. Elsa Norris and the Marker
Mrs. Norris is the author of the 1976 essay “A Place to Tie To” which told the history of the Vale Community Center—as the building was called then.

Click or scan to see
this page online
Route 665), on the right when traveling west on Vale Road. Touch for map. Marker is at or near this postal address: 3124 Fox Mill Rd, Oakton VA 22124, United States of America. Touch for directions.

Regarding Vale School / Vale Community House. From the program for the historic highway marker unveiling ceremony and Diamond Jubilee Fair: “[Vale School] served not only as a place in which to educate the children, but also as a place for friends and neighbors to gather to celebrate the children’s achievements, to hold neighborhood business meetings and to attend social gatherings. The Vale Literary Society, Vale Farmer’s Club, and the Wide Awake Lodge all met at the schoolhouse. The building was also used as a place of worship until the Vale Methodist Church sanctuary was constructed across the road in 1896.” ... “In 1937, a library was opened [at the Vale Community House, its new name,] and ‘Recreation Saturdays’ for children 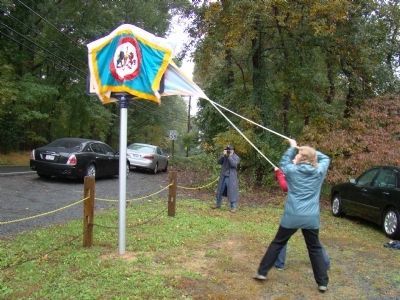 Photographed By J. J. Prats, October 17, 2009
3. Unveiling the Marker
At two minutes after noon Trish Strat and Elizabeth Scarcella pull the ropes to unveil the marker. Recording the moment for posterity is Fairfax County History Commission chair of the Marker Committee Jack Hiller.
began. In the 1950s, six-week summer summer recreation programs were held for the children from Vale and nearby neighborhoods and dances for teenagers attracted as many as 60 to 75 participants. Community sings, oyster suppers, ice cream socials and other fun events provided activity that entire families could enjoy together throughout the year.” 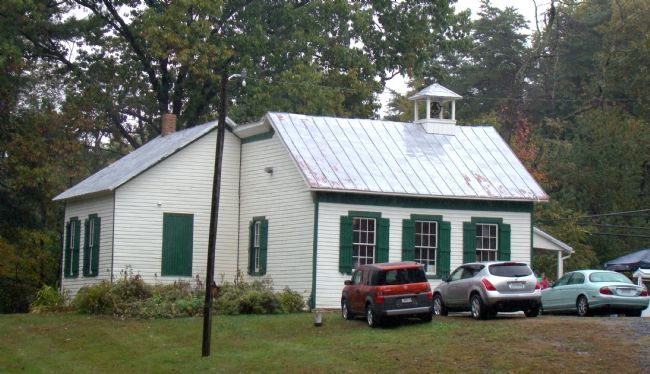 Photographed By J. J. Prats, October 17, 2009
4. Vale School, now the Vale Community House
67th District, Virginia House of Delegates; and Annie Liddell, Waples Mill Elementary School 6th Grader, who read her winning essay, “Why I like to Live in My Community.” To begin the ceremony, Quinton, Adian and Isabella Ricci, the 3rd generation of the Ricci family to participate in the annual Vale Fair, rang the school bell; Richard Gibbons lead the Pledge of Allegiance; and Casey Trottier beautifully sang “America the Beautiful.”
— Submitted October 20, 2009.
2. Text of the Resolution Presented by Supervisor Sharon Bulova
Fairfax County Board of Supervisors Resolution Commending the Vale Club on the occasion of its 75th anniversary It was dated October 17, 2009, and signed by Sharon Bulova, Chairman, and Michael R. Frey, Supervisor, Sully District.

WHEREAS, the Vale Club was founded on October 11, 1934, as a home demonstration club for farm women affiliated with the Virginia Cooperative Extension Service of Virginia Tech; and

WHEREAS, in 1935 the founding women petitioned the Fairfax County School Board to convert the abandoned neighborhood schoolhouse into a community house; and

WHEREAS, the women renovated the building, organized fundraisers during the Depression era and purchased the schoolhouse from the School Board in 1938; and 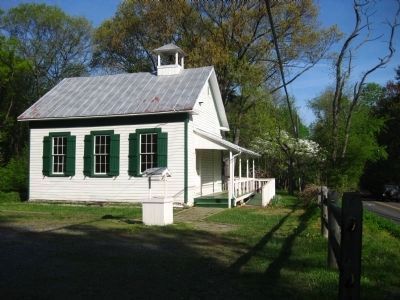 Photographed By Patricia Strat, April 28, 2009
5. Vale Schoolhouse
The schoolhouse faces Fox Mill Road. The decorative wishing well protects the well pump of a well dug in the 1950s. There wasn’t a well on the property when the building was used as a school.
the Vale Club has kept the community connected and participates in numerous community service projects and activities; and

WHEREAS, the Vale Club was successful in its endeavor to have the Vale Schoolhouse registered in the Fairfax County Inventory of Historic Sites in 1979 and the Virginia Landmarks Registry and the National Register of Historic Places in 2009; NOW THEREFORE

BE IT RESOLVED, that the Fairfax County Board of Supervisors, on behalf of all residents of Fairfax County, does hereby thank the Vale Club for its years of service in Fairfax County and congratulate it on the 75th anniversary.
— Submitted November 4, 2009.
3. Text of the Resolution Presented by Delegate Chuck Caputo
House Joint Resolution No. 803 Commending the Friends of Vale Schoolhouse, Inc., on the occasion of its 75th anniversary. Agreed to by the House of Delegates, January 30, 2009. Agreed to by the Senate, February 5, 2009.

WHEREAS, the Vale Home Demonstration Club, now the Friends of Vale Schoolhouse, Inc., is celebrating its 75th anniversary of service to the community of Fairfax County; and

WHEREAS, on October 11, 1934, Florence Jodzies and 12 founding members organized the Vale Home Demonstration Club; and

WHEREAS, the Vale Home Demonstration Club joined 12 other clubs in Fairfax County 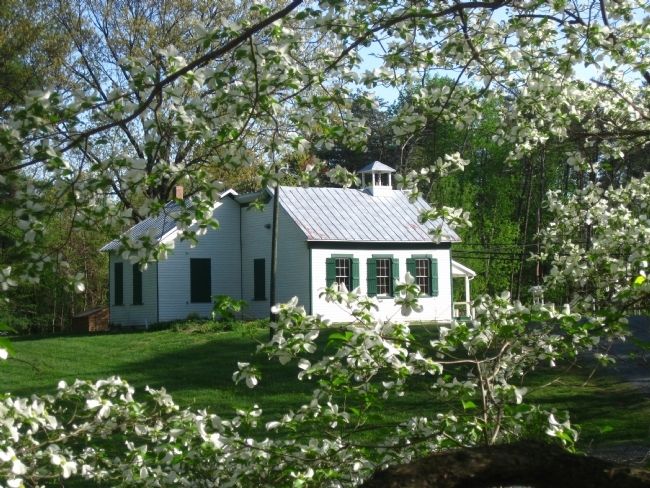 Photographed By Patricia Strat, April 28, 2009
6. Vale Schoolhouse
The original room, on the right, is used as a meeting room. The 1912 addition, on the left, has been used as a kitchen since 1935.
in their affiliation with the Virginia Polytechnic Institute and State University’s Cooperative Extension Service program for farm women; and

WHEREAS, on June 4, 1935, the Vale Home Demonstration Club petitioned the Fairfax County School Board not to sell the two-room, wood-framed Vale School located at the intersection of Vale and Fox Mill Roads in Oakton, but to allow the building to be used for the benefit of the community; and

WHEREAS, on July 12, 1935, the Fairfax County School Board granted the Vale Home Demonstration Club exclusive use of the school property, and the building became the Vale Community House and the center of neighborhood events and activities, as well as a cherished historic landmark for residents; and

WHEREAS, on August 2, 1937, the ambitious members of the Vale Home Demonstration Club began raising funds to buy the Vale Community House and offered the Fairfax County School Board $270 for the property, which was accepted and the deed was transferred to the club on February 21, 1938; and

WHEREAS, by the time the Fairfax County Council of Home Demonstration Clubs celebrated its 50th anniversary in 1968 there were 46 clubs participating in the extension service’s program; and

WHEREAS, by the end of the century, Fairfax County was becoming increasingly urban, the number of clubs dwindled to eight, and the Fairfax County Association of clubs ended in 1999, but the 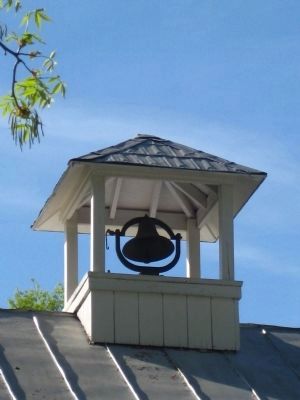 Photographed By Patricia Strat, April 28, 2009
7. Vale Schoolhouse
The original bell tower lasted into the 1950s. This bell tower and antique bell were installed in 1986. The original bell was sold by the Vale Club at a fundraising auction in the 1950s. The old bell is currently in Boyce, VA, outside the home of the individual who purchased it.
vibrant Vale Home Demonstration Club remained active and strong; and

WHEREAS, in 2001 the Vale Home Demonstration Club reorganized and became the Friends of Vale Schoolhouse, Inc.; and

WHEREAS, today, the club’s 180 dedicated and hardworking members continue a long tradition of service to the community, helping residents in need, hosting events such as the annual fall fair and Labor Day is Neighbor Day, and raising money to preserve the 125-year old Vale Community House; now, therefore, be it

RESOLVED by the House of Delegates, the Senate concurring, That the General Assembly commend and congratulate the Vale Home Demonstration Club, now the Friends of Vale Schoolhouse, Inc., on the occasion of its 75th anniversary; and, be it

RESOLVED FURTHER, That the Clerk of the House of Delegates prepare a copy of this resolution for presentation to the Friends of Vale Schoolhouse, Inc., as an expression of the General Assembly’s gratitude to the club for its service to Fairfax County and best wishes for a joyful anniversary celebration.
— Submitted October 20, 2009. 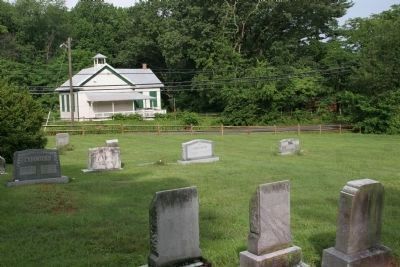 Photographed By Carol Cross, June 4, 2008
8. Vale Schoolhouse
View of the schoolhouse from the Vale United Methodist Church cemetery. Fox Mill Road follows the fence line between the cemetery and the schoolhouse. 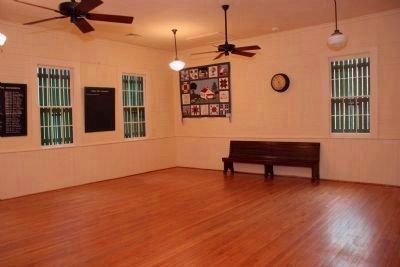 Photographed By Carol Cross, May 12, 2008
9. Vale Schoolhouse
The original room. In 1989, the quilt on the back wall won top honors in the Cultural Arts competition at the annual Virginia Extension Homemakers Conference held at Virginia State University. The quilt was also given the People's Choice Award and thus eligible to enter the national competition held at Kansas State University. Over a dozen Vale Club members helped with the design, piecing and quilting over a six-month period. 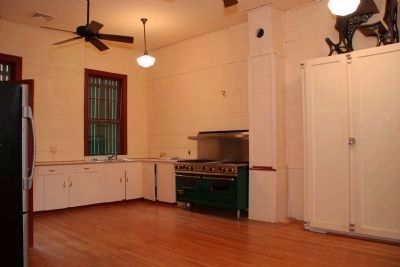