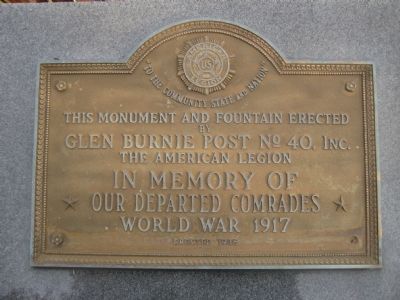 This monument and fountain erected by Glen Burnie Post No. 40, Inc., The American Legion, in memory of our departed comrades, World War 1917.

Topics. This memorial is listed in these topic lists: Military • War, World I.

Location. 39° 9.789′ N, 76° 37.552′ W. Marker is in Glen Burnie, Maryland, in Anne Arundel County. Memorial is at the intersection of Crain Highway South (Business Maryland Route 3) and 1st Avenue, on the right when traveling north on Crain Highway South. Monument is 125 feet north of the intersection along Crain Highway. Touch for map. Marker is in this post office area: Glen Burnie MD 21061, United States of America. Touch for directions.

Other nearby markers. At least 8 other markers are within 2 miles of this marker, measured as the crow flies. Defending the Chesapeake Bay (within shouting distance of this marker); World War II (about 400 feet away, measured in a direct line); St. Alban's Episcopal Church (about 500 feet away); Sgt. Ronald M. Randazzo (approx. 0.2 miles away); Recreation Acres 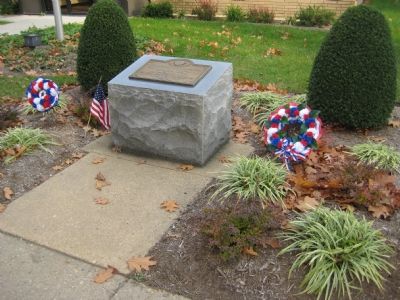 Additional comments.
1. Removal Of Fountain
As a teenager in the 1960's, I enjoyed passing through the fountain area. A brick wall, containing the WWI Memorial Plaque formed a semi-circular alcove where one could sit on a bench and look at the fountain and the street beyond. I would spend a few peaceful moments and ponder those who had served their country. I also remember it as shady so there must have been some trees overhanging the wall. I was appalled, therefore, when the entire site was demolished in order to construct a city building fronted by a nondescript lawn where the memorial had stood. I considered it an insult to those who had served, even though the original plaque was eventually placed in the lawn.

Upon discovering this database, I was very pleased with the photograph which showed wreaths around the marker. The short pathway and the stone encasing the plaque give it more prominence though that may be a fault in my memory. 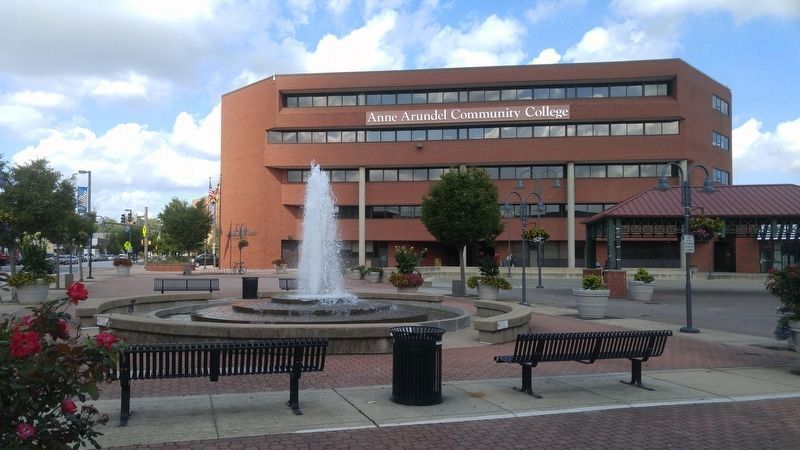 By F. Robby, October 3, 2016
3. Glen Burnie Fountain
This fountain is located in front of the Arundel Center North building in Glen Burnie, housing the Anne Arundel Community College, at the intersection of B&A Blvd and Crain Hwy, about 2 blocks north of the World War 1917 marker. This fountain is said to have replaced the older fountain referred to on the marker, which according to older residents of the town was frequently filled with soap by high school pranks, and subsequently removed.
Even though it does not equal the beauty of the original, it is very reassuring to know that the servicemen who were originally honored are still respected.
— Submitted May 30, 2011, by Kathleen Skaling Cresswell of Winter Springs, Florida.
Credits. This page was last revised on September 25, 2017. It was originally submitted on November 30, 2007, by F. Robby of Baltimore, Maryland. This page has been viewed 1,761 times since then and 41 times this year. Photos:   1, 2. submitted on November 30, 2007, by F. Robby of Baltimore, Maryland.   3. submitted on October 3, 2016, by F. Robby of Baltimore, Maryland.
Share This Page.