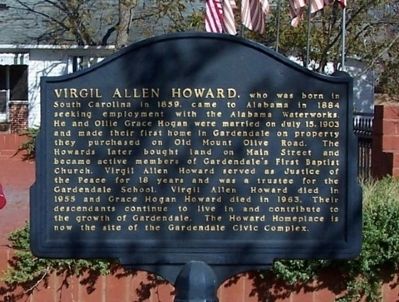 Virgil Allen Howard, who was born in South Carolina in 1859, came to Alabama in 1884 seeking employment with the Alabama Waterworks. He and Ollie Grace Hogan were married on July 15, 1903 and made their first home in Gardendale on property they purchased on Old Mount Olive Road. The Howards later bought land on Main Street and became active members of Gardendale’s First Baptist Church. Virgil Allen Howard served as Justice of the Peace for 18 years and was a trustee for the Gardendale School. Virgil Allen Howard died in 1955 and Grace Hogan Howard died in 1963. Their descendants continue to live in and contribute to the growth of Gardendale. The Howard Homeplace is now the site of the Gardendale Civic Center Complex. 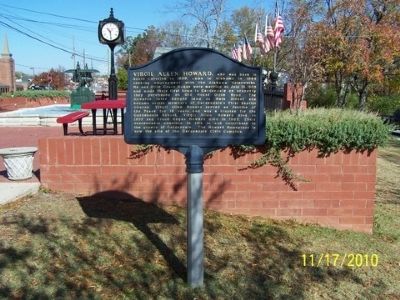 November 17, 2010
2. Virgil Allen Howard Marker
Center Drive, on the right when traveling north. The marker is located in the northwest corner of Gardendale's Millennium Park. Touch for map. Marker is at or near this postal address: 875 Main Street, Gardendale AL 35071, United States of America. Touch for directions.

Other nearby markers. At least 8 other markers are within 7 miles of this marker, measured as the crow flies. Gardendale, Alabama (a few steps from this marker); Black Creek Park, Five Mile Creek Greenway Partnership and the Fultondale Coke Oven Park (approx. 1.9 miles away); Tarrant City Hall (approx. 4.9 miles away); History of the 117th Tactical Reconnaissance Wing (approx. 5.9 miles away); Brookside's Unique Heritage / Brookside Russian Orthodox Church (approx. 6.2 miles away); Zion Memorial Gardens (approx. 6.4 miles away); North Birmingham (approx. 6.6 miles away); Rev. Fred Shuttlesworth Bethel Baptist Church (approx. 6.7 miles away).
Credits. This page was last revised on November 1, 2019. It was originally submitted on December 21, 2010. This page has been viewed 936 times since then and 30 times this year. Photos:   1, 2. submitted on December 21, 2010. • Syd Whittle was the editor who published this page.
Share This Page.