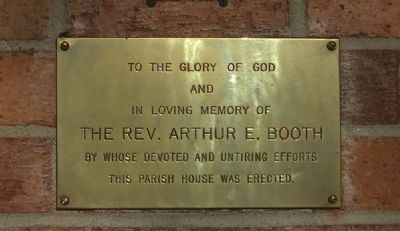 By Kevin W., November 18, 2007
1. Booth Hall Marker
Inscription.
Booth Hall. .
To the Glory of God and In loving memory of The Rev. Arthur E. Booth by whose devoted and untiring efforts this Parish House was erected. . This historical marker was erected by Christ Episcopal Church. It is in Spotsylvania Courthouse in Spotsylvania County Virginia

To the Glory of God
and
In loving memory of
The Rev. Arthur E. Booth
by whose devoted and untiring efforts
this Parish House was erected 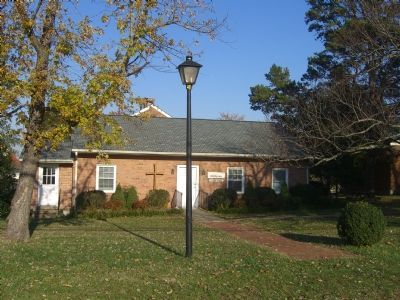 By Kevin W., November 18, 2007
2. Booth Hall and Marker
During its over 165 years of existence, Christ Church has been temporarily closed several times. When it first closed in 1884, one mother complained, “This is the worst place in the world, where the cuckoo never sings, the primrose never blooms, and the babies are never baptized.” The last time the Church closed was in the late 1950s, when the congregation has dwindled to just six women. These women kept the church clean and donated dimes for the privilege of doing the cleaning. It was at this time that the Reverend Arthur Booth was assigned to reopen and serve Christ Church. During his tenure, the congregation grew from just a handful to around 35 parishioners. The Reverend Booth spearheaded the effort to build the present parish hall, which is named in his honor.

Additional comments.
1. Private Harrison Loses His Home
Private Edgar Harrison and his family lived on the Harrison Farm, about a mile north of the Church. Private Harrison's unit took up position on Myers Hill, located behind Christ Church, into positions set up to defend the Confederate flank during the battle of Spotsylvania Courthouse.

Only a few days later, Ann Harrison greeted Robert E. Lee and his staff as they led their horses to her doorstep and declared the house to be their headquarters. The Confederates 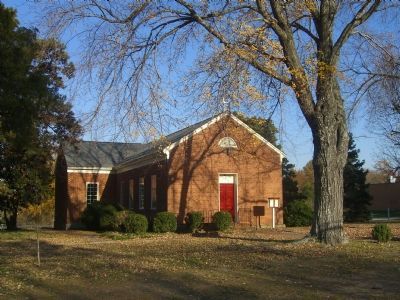 From his position on Myer’s hill, scant miles from his own farm, Private Harrison watched in horror as, during the ensuing battle, flames and smoke consumed his home. His wife and daughters, however, miraculously survived.
— Submitted December 3, 2007, by Kevin W. of Stafford, Virginia. 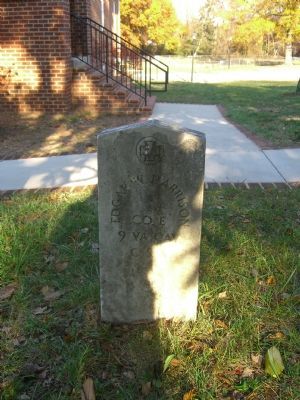 By Kevin W., November 18, 2007
4. Pvt. Edgar W. Harrison, Co. E, 9th VA Cav, CSA
To the right of the Sanctuary are the four graves of Pvt. Harrison, his wife, and their two daughters, ages 3 and 6 at the time of the Battle of Spotsylvania.
More. Search the internet for Booth Hall.