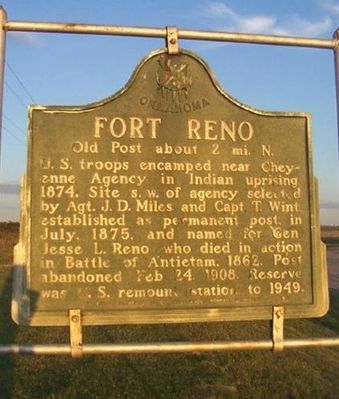 Topics and series. This historical marker is listed in this topic list: Forts and Castles. In addition, it is included in the Buffalo Soldiers, and the Oklahoma Historical Society series lists. A significant historical month for this entry is July 1875.

Location. 35° 32.242′ N, 98° 1.566′ W. Marker is near El Reno, Oklahoma, in Canadian County. Marker is on Business Interstate 40 east of Old U.S. 66, on the right when traveling west. Marker is on a roadside pullout, about two miles from Fort Reno (from the east, take old Highway 66 and soon after you'll see the entrance to the Fort Reno site). Touch for map. Marker is in this post office area: El Reno OK 73036, United States of America. Touch for directions. 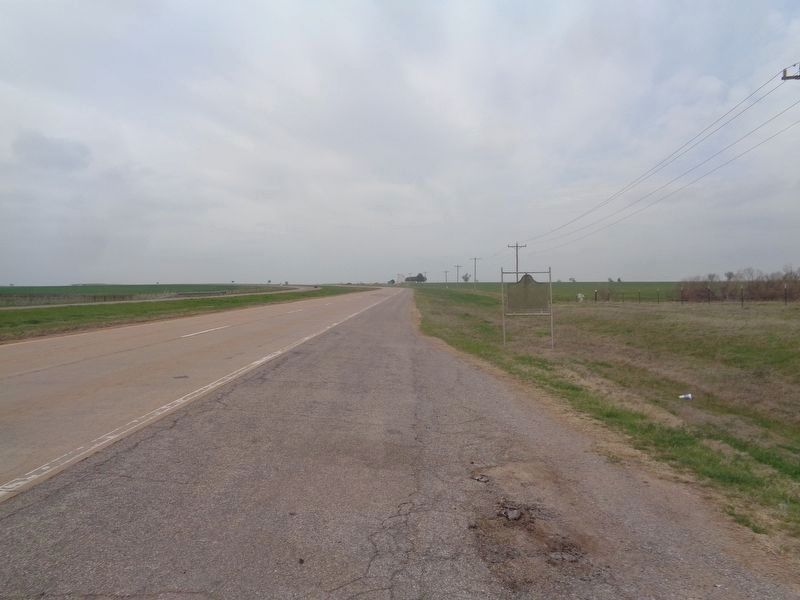 Photographed By Jason Voigt, April 9, 2021
2. Fort Reno Marker
Marker is on a roadside pullout, very close to the Business 40/OK-66 and Old Route 66 junction. This is looking west.

More about this marker. Marker repeats on both sides.

Regarding Fort Reno. Fort Reno, a military camp in 1874, was established to protect the personnel at the Cheyenne & Arapaho Agency. In 1875, the commanding officer was authorized to select a site for a military post. First known as the "Camp Near Cheyenne Agency," the location was named Fort Reno in honor of Major Jesse Reno in 1876. The cavalry and infantry stationed at Fort Reno played an important role in the transition of the area from Indian Territory status through Oklahoma statehood. United States Cavalry units, including the Buffalo Soldiers (the 9th and 10th U.S. Cavalry), and the Cheyenne & Arapaho Indian Scouts maintained the peace on the central plains until the turn of the century. The Fort Reno troops helped extract the "Boomers" from the Unassigned Lands of Indian Territory prior to their opening for settlement through the 1889 land run. The Fort Reno soldiers also assisted with other land runs in 1892 and 1894.
Credits. This page was last revised on April 10, 2021. It was originally submitted on January 19, 2011, by Christopher Suttle of Norman, Oklahoma. This page has been viewed 1,264 times since then and 34 times this year. Photos:   1. submitted on January 19, 2011, by Christopher Suttle of Norman, Oklahoma.   2. submitted on April 10, 2021, by Jason Voigt of Glen Carbon, Illinois. • Bill Pfingsten was the editor who published this page.
Share this page.