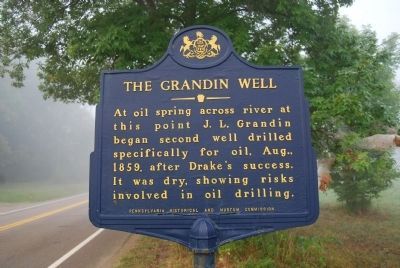 By Mike Wintermantel, September 3, 2012
1. The Grandin Well Marker
Inscription.
The Grandin Well. . At oil spring across river at this point J. L. Grandin began second well drilled specifically for oil, August, 1859, after Drake's success. It was dry, showing risks involved in oil drilling. . This historical marker was erected in 1959 by Pennsylvania Historical and Museum Commission. It is Near Tidioute in Warren County Pennsylvania

Other nearby markers. At least 8 other markers are within 9 miles of this marker, measured as the crow flies. The First Flowing Oil Well (approx. 0.2 miles away); Grettenberger Pump (approx. half a mile away); Indian Paint Hill (approx. 4.1 miles away); Lawunakhannek (approx. 6.3 miles away); Goschgoschink 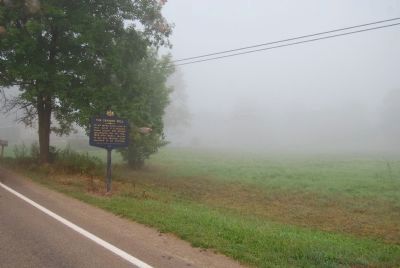 By Mike Wintermantel, September 3, 2012
2. The Grandin Well Marker
(approx. 7.6 miles away); Hickory Town (approx. 8.2 miles away); Hearts Content Recreation Area (approx. 8½ miles away); Indian Paths (approx. 9.1 miles away). Touch for a list and map of all markers in Tidioute.

Also see . . .  The Grandin Well - Behind the Marker. ExplorePAhistroy.com (Submitted on January 26, 2011, by Bernard Fisher of Mechanicsville, Virginia.)
Credits. This page was last revised on June 16, 2016. It was originally submitted on January 24, 2011, by Mike Wintermantel of Pittsburgh, Pennsylvania. This page has been viewed 538 times since then and 2 times this year. Photos:   1, 2. submitted on September 3, 2012, by Mike Wintermantel of Pittsburgh, Pennsylvania. • Bernard Fisher was the editor who published this page.
Share This Page.