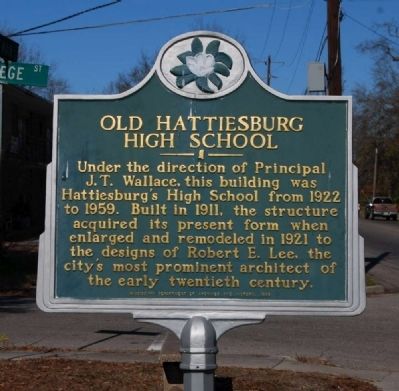 Photographed By Brian Scott, January 23, 2011
1. Old Hattiesburg High School Marker
Inscription.
Old Hattiesburg High School. . , Under the direction of Principal J.T. Wallace, this building was Hattiesburg's High School from 1922 to 1959. Built in 1911, the structure acquired its present form when enlarged and remodeled in 1921 to the designs of Robert E. Lee, the city's most prominent architect of the early twentieth century. . This historical marker was erected in 1998 by Mississippi Department of Archives and History. It is in Hattiesburg in Forrest County Mississippi

Under the direction of Principal J.T. Wallace, this building was Hattiesburg's High School from 1922 to 1959. Built in 1911, the structure acquired its present form when enlarged and remodeled in 1921 to the designs of Robert E. Lee, the city's most prominent architect of the early twentieth century.

Erected 1998 by Mississippi Department of Archives and History.

Topics and series. This historical marker is listed in this topic list: Education. In addition, it is included in the Mississippi State Historical Marker Program series list. A significant historical year for this entry is 1922. 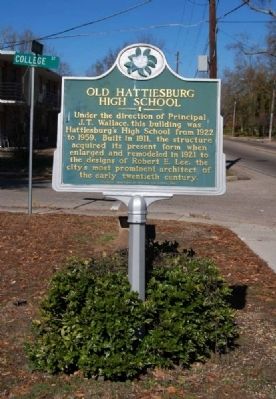 The 1911 building is flat roofed and constructed of tan brick. The windows on both floors have double hung sash and are grouped in pairs. This section of the building exhibits no ornamentation.

The main building was built in 1921 from designs in the Jacobethan Style by the architect, Robert E. Lee. Constructed of red brick, the building features cast stone facings, belt courses, and 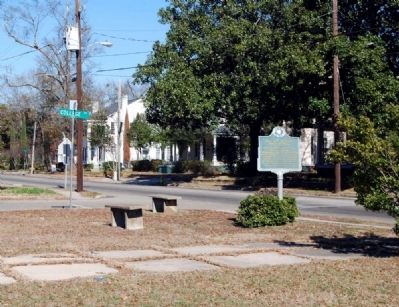 Photographed By Brian Scott, January 23, 2011
3. Old Hattiesburg High School Marker
cornices. All of the windows in this section have nine-over-nine double-hung sash and are grouped in pairs or triads. The building is divided into three blocks. The central block is four stories tall with a steep gable roof. The outer blocks are only three stories tall with tall parapets. Towers accent the junctures between the 1921 three story blocks and the 1911 building and between the lower,
outer blocks with the tall center section of the 1921 structure.

The center block is three bays wide. Each bay contains a triad of double-hung windows on each floor except for the ground floor center bay which features a transomed and sidelighted entrance which is protected by a segmentally-arched porch. The windows of the third and fourth floors are united by panels of cast stone. Above the cornice the center bay is crenellated. The outer bays rise into steep gables which are ornamented with cast-stone gable peaks.

The three-story wings are less elaborately decorated. They lack gables, creneilations and the paneling between the windows. The towers between the 1911 and 1921 buildings are also simply treated. However, the towers that emphasize the junctures of the three blocks
of the more recent building are highly decorated. They are each entered through a segmentally-arched, gabled porch, one of which is labeled "Girls," the other, "Boys." The windows of the 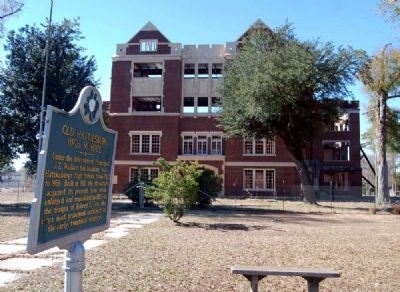 Photographed By Brian Scott, January 23, 2011
4. Old Hattiesburg High School and Marker
towers' third and fourth floors are united by panels in the manner of the center block in addition to which they are framed by quoins. The tall parapets which crown these towers are pierced by triads of small arched windows.

Significance
The Old Hattiesburg High School is architecturally significant in the history of the "Hub City" because it is the largest and most sophisticated example of the Jacobethan Style in the city and is the only known design in the style by Robert E. Lee. Lee was Forrest
County's foremost architect of the early twentieth century and is, perhaps, better known for his Neo-classical designs for Hattiesburg's 1923 City Hall, 1920 Masonic Temple, and 1907 I.O.O.F. Lodge No. 27.
He was also responsible for the designs of the 1907 Ross Building in the Chicago Commercial Style and a 1927 Mission Style school in Brooklyn, Mississippi.

Although widely used in turn-of-the-century American residential design, the Jacobethan Style made its most profound impact upon educational buildings of the period. The warm red brick walls set off by pale facings and the lively towered and gabled silhouettes which are characteristic of the style presented a "cheerful" alternative to the glacial Neo-classical and somber Collegiate Gothic Styles which 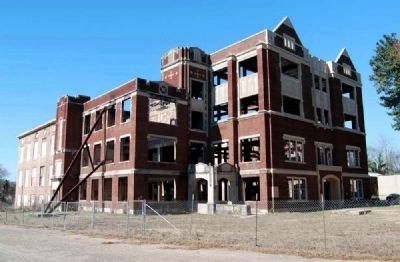 Photographed By Brian Scott, January 23, 2011
5. Old Hattiesburg High School -
East Corner
After Fire Damage
were also considered appropriate for academic buildings. (Marcus
Whiffen, American Architecture Since 1780. [Cambridge: M.I.T. Press 1976], p. 177). The pervasive popularity of the Jacobethan Style is reflected in Mississippi by such widely scattered examples as the 1925 Old Central High School in Jackson (National Register 1976), the 1927 Starkville Middle School (National Register 1982) and the Old Ocean Springs High School which dates from 1927. Lee's 1921 design for the Hattiesburg High School is not only older than the above examples, it also
exceeds them in its masterly-handled complex massing and the articulation and unification of its elevations accomplished through its cast stone ornamentation.

The Old Hattiesburg High School currently serves as office space for the Board of Education. It was the third school building erected on the site. The first wooden school burned in 1911 and was replaced by a two-story, tan, brick building originally covered by a mansard roof. This roof was removed in 1921 when the present Jacobethan Style building was added to the east of the 1911 structure. (Source: National Register Nomination Form, 1987.)
— Submitted July 23, 2011, by Brian Scott of Anderson, South Carolina. 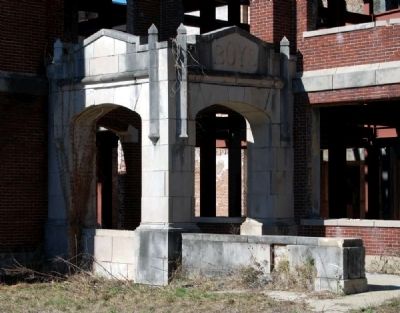 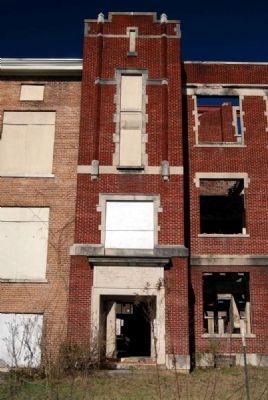