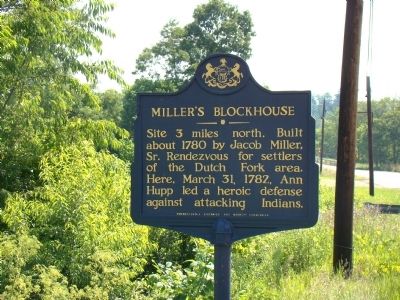 Topics and series. This historical marker is listed in this topic list: Wars, US Indian. In addition, it is included in the Pennsylvania Historical and Museum Commission series list. A significant historical month for this entry is March 1880. 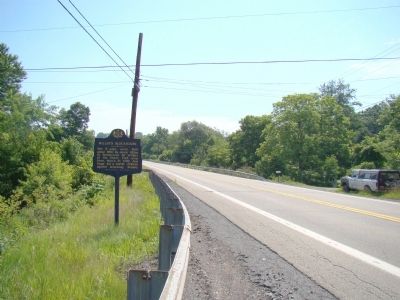 Also see . . .
1. Hupp's on the Frontier. A site outlining the Hupp family's life on the frontier borders of Virginia and Pennsylvania. (Submitted on February 7, 2011, by Olin Hupp of Baltimore, Maryland.)

2. Miller’s Block-House. A subsite of the above link includes a Hupp Family Tale, by John C. Hupp, MD, about defending Miller's Blockhouse.
“Again, in this crisis of terrible travail, Ann Hupp proved equal to the emergency. Encouraging the trembling Ault and the weeping women with the consoling language of hope – nerving her arm and steeling her heart to the severe duties of the moment, she, with true Spartanism, snatching up a rifle fired at the approaching savages, and then ‘ran from porthole to porthole,’ protruding its muzzle in different directions—to convey the idea of great forces in the house” (Submitted on July 18, 2008.)
Credits. This page was last revised on January 6, 2021. It was originally submitted on July 18, 2008, by J. J. Prats of Powell, Ohio. This page has been viewed 2,475 times since then and 88 times this year. Last updated on February 3, 2011, by Olin Hupp of Baltimore, Maryland. Photos:   1, 2. submitted on July 18, 2008, by J. J. Prats of Powell, Ohio. • Kevin W. was the editor who published this page.
Share this page.