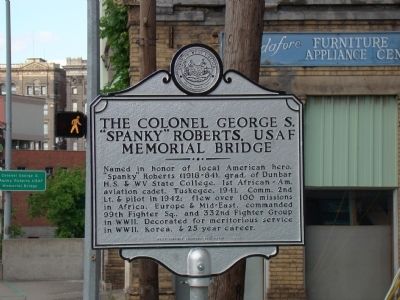 Topics and series. This historical marker is listed in these topic lists: African Americans • War, Korean • War, World II. In addition, it is included in the West Virginia Archives and History series list. A significant historical year for this entry is 1941.

Other nearby markers. At least 8 other markers are within walking distance of this marker. David Morgan (1721–1813) / Patriot, Defender (approx. 0.2 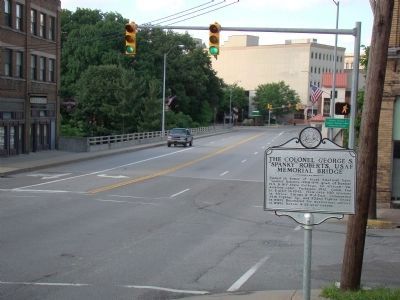 Regarding The Colonel George S. “Spanky” Roberts, USAF Memorial Bridge. Please note, while the marker indicates Colonel Roberts' career had a 25 year career, he was in service for 27 years. Colonel Roberts became the first African American cadet accepted for Army Air Corps pilot training in 1941, and retired with the rank of Colonel in February 1968.

Also see . . .  . 1993 article by Jerry A Davis in Alabama Heritage with photograph of Colonel Roberts (page 40). “The Tuskegee airmen, however, had every reason to celebrate. They had proven to American society that no discrepancy existed between the effectiveness of properly trained black and white soldiers. Perhaps their success in action during 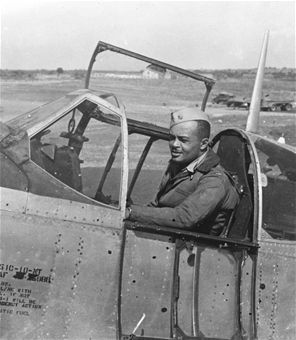 By U.S. Air Force
3. Colonel George S. “Spanky” Roberts, USAF
World War II helped change attitudes towards integration in the American military; certainly their success brought about a strong sense of pride among those who served. Two years after the last Tuskegee airman graduated, President Truman ordered the desegregation of the armed forces, and the Defense Department announced the end of mandated segregation in the U.S. military. Wherever they were, the Tuskegee airmen must have cheered.” (Submitted on August 1, 2009.)