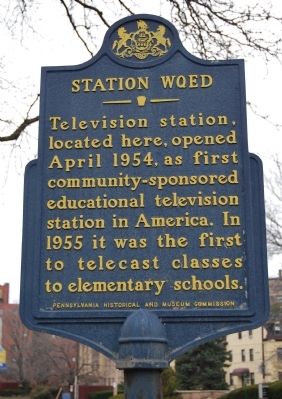 Photographed By Mike Wintermantel, March 13, 2011
1. Station WQED Marker
Inscription.
Station WQED. . Television station, located here, opened April 1954, as first community-sponsored educational television station in America. In 1955 it was the first to telecast classes to elementary schools. . This historical marker was erected in 1964 by Pennsylvania Historical and Museum Commission. It is in Pittsburgh in Allegheny County Pennsylvania

Television station, located here, opened April 1954, as first community-sponsored educational television station in America. In 1955 it was the first to telecast classes to elementary schools.

Topics and series. This historical marker is listed in these topic lists: Communications • Education • Industry & Commerce. In addition, it is included in the Pennsylvania Historical and Museum Commission series list. A significant historical year for this entry is 1954.

Location. 40° 26.831′ N, 79° 56.672′ W. Marker is in Pittsburgh, Pennsylvania, in Allegheny County. Marker is on Fifth Avenue west of Devonshire Street, on the right when traveling east. Located at WQED station in the Oakland Section of Pittsburgh. Touch for map. Marker is at or near this postal address: 4802 Fifth Avenue, Pittsburgh PA 15213, United States of America. Touch for directions. 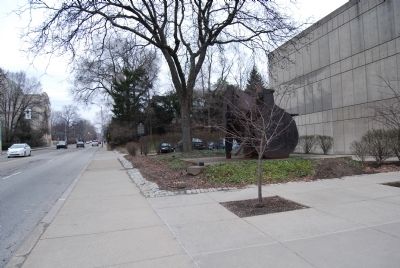 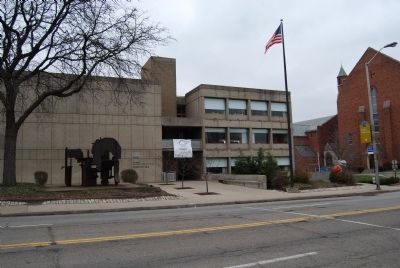 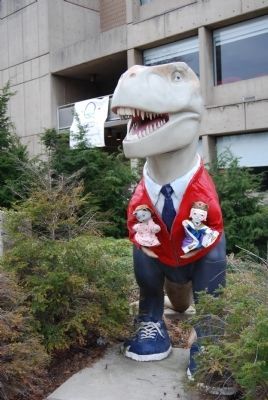 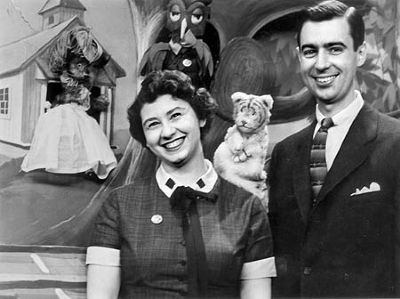 Photographed By Unknown, circa 1960
5. Screenshot of Fred Rogers and Josie Carey on The Children's Corner
A native of Butler, PA, Josie Carey–born Josephine Vicari–was the host of The Children's Corner, WQED's first children show, from 1954 to 1961. Fred Rogers served as her collaborator, co-song writer, and puppeteer for the next seven years. After spending a few years in Canada, Rogers returned to WQED, where he hosted Mister Rogers' Neighborhood, one of the most successful and beloved children's programs in American television history, from 1968 to 2000. Courtesy of WQED Pittsburgh 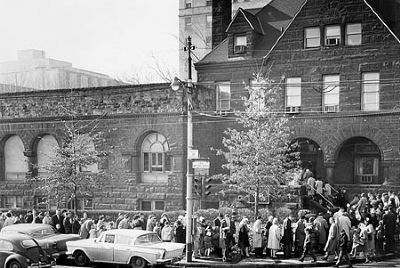 Photographed By Mike Wintermantel, 1963
6. WQED Building
After acquiring local television station WENS-TV, WQED changes its call letters to WQEX and returned it to the airwaves in 1963 for use as its secondary channel for educational programs. On a chilly Sunday in 1963, more than 5,000 people jammed WQED's Fifth Avenue building to tour the new station. Courtesy of Pittsburgh Post Gazette 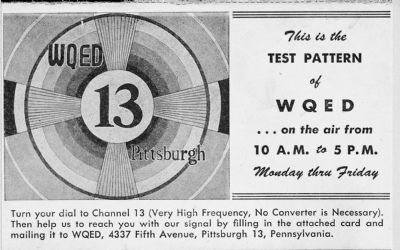 Photographed By N/a, 1954
7. WQED test pattern postcard
Unsure of the sharpness of its signal or how far it would carry, WQED mailed this postcard to people who had signed up for a station membership before it began broadcasting on April 1, 1954. It asked them to return it with a brief description of the quality of the station signal on the back. Courtesy of WQED Pittsburgh
Credits. This page was last revised on June 16, 2016. It was originally submitted on March 14, 2011, by Mike Wintermantel of Pittsburgh, Pennsylvania. This page has been viewed 768 times since then and 10 times this year. Photos:   1, 2, 3, 4. submitted on March 14, 2011, by Mike Wintermantel of Pittsburgh, Pennsylvania.   5, 6, 7. submitted on July 26, 2011, by Mike Wintermantel of Pittsburgh, Pennsylvania. • Bernard Fisher was the editor who published this page.
Share this page.