A Town with Charm 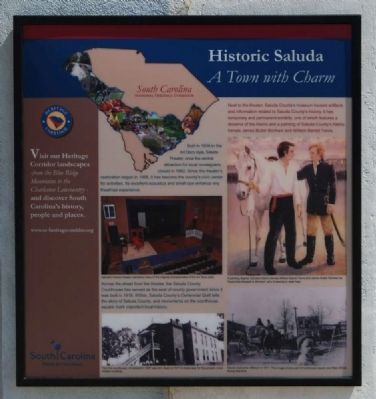 Photographed By Brian Scott, April 4, 2011
1. Historic Saluda Marker
Inscription.
Historic Saluda. A Town with Charm. , Built in 1936 in the Art Deco style, Saluda Theater, once the central attraction for local moviegoers closed in 1982. Since the theater's restoration began in 1988, it has become the county's civic center for activities. Its excellent acoustics and small size enhance any theatrical experience. , Across the street from the theater, the Saluda County Courthouse has served as the seat of county government since it was built in 1918. Within, Saluda County's Centennial Quilt tells the story of Saluda County, and monuments on the courthouse square mark important local history. , Next to the theater, Saluda County's museum houses artifacts and information related to Saluda County history. It has temporary and permanent exhibits, one of which features a diorama of the Alamo and a painting of Saluda County's Alamo heroes James Butler Bonham and William Barrett Travis. . This historical marker was erected by South Carolina Heritage Corridor. It is in Saluda in Saluda County South Carolina

Built in 1936 in the Art Deco style, Saluda Theater, once the central attraction for local moviegoers closed in 1982. Since the theater's restoration began in 1988, it has become the county's civic center for activities. Its excellent acoustics and small size enhance any theatrical experience.

Across the street from the theater, the Saluda County Courthouse has served as the seat of county government since it was built in 1918. Within, Saluda County's Centennial Quilt tells the story of Saluda County, and monuments on the courthouse square mark important local history.

Next to the theater, Saluda County's museum houses artifacts and information related to Saluda County history. It has temporary and permanent exhibits, one of which features a diorama of the Alamo and a painting of Saluda County's Alamo heroes James Butler Bonham and William Barrett Travis.

Topics and series. This historical marker is listed in these topic lists: Architecture • Arts, Letters, Music

Click or scan to see
this page online
• Entertainment • Settlements & Settlers. In addition, it is included in the Art Deco, and the South Carolina Heritage Corridor series lists. A significant historical year for this entry is 1936. 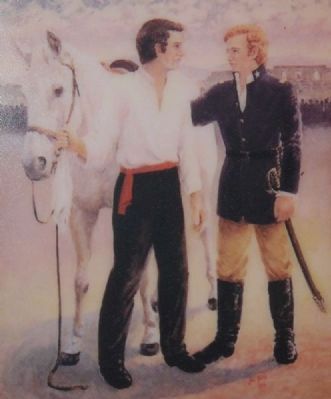 6. Saluda Theatre. Designed by Charles B. Thompson, the Saluda Theatre is a two-story, stuccoed masonry building constructed in 1936 as a cinema. (Submitted on April 10, 2011, by Brian Scott of Anderson, South Carolina.)

Additional commentary.
1. Saluda Theatre
The Saluda Theatre is a two-story, stuccoed masonry building constructed in 1936 as a cinema. The theatre is prominently sited in downtown Saluda across the street from the courthouse square. The crisp, simple lines of the facade and the geometric designs of the interior wall finishes and lighting fixtures reveal the influence of the Art Deco style. The theatre is in good condition and has had very little alteration since its construction.

The facade (west elevation) of the theatre is broken into recessed and projecting flat planes. The first story of the facade is divided into three sections. The central section is recessed beneath the marquee. This recessed section contains a projecting glass ticket booth flanked by double doors leading to the main level of the theatre. The original wood doors have been replaced with heavy glass metal doors. The recessed section is flanked on each side by inset cases for posters. The outermost bays contain doors that open to stairs 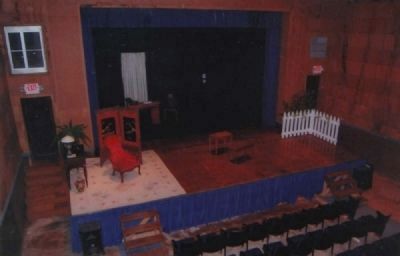 Photographed By Brian Scott, April 4, 2011
5. Interior of Saluda Theater
Saluda's historic theater maintains many of the original characteristics of the Art Deco style.
leading to the balcony.

The marquee extends over the sidewalk and features "Saluda" in red neon letters over an undulating yellow neon band. The announcement board is framed in red neon, while paired green neon bands wrap the sides of the marquee.

The central section of the upper facade projects forward above the marquee. This section is defined by a green neon perimeter band and features a neon Indian profile complete with feathered headdress. Below the Indian, a recessed rectangular area (marked "billboard" on the original plans) is highlighted with red neon. The bays on each side of the central section also project forward, but not as far as the central section. The outermost bays do not project. The two bays on each side of the central bay contain single six-over-six windows. The upper facade is framed by pilasters at the corners of the building. A banded and corbelled cornice caps the facade and is accentuated with three contrasting bands.

Photographed By Brian Scott, April 4, 2011
6. First Saluda County Courthouse ( 1897-1918)
The first courthouse, completed in 1897 was torn down in 1917 to make way for the present more modern building.
of the theatre is covered by a gable roof, which is obscured by the integrated parapet wall of the facade. A section to the rear of the gable portion is raised to accommodate the stage house.

The doors on either side on the ticket booth open into an entrance lobby. The lobby flows directly into an enclosed corridor, which is parallel to the street. This corridor opens into the auditorium and has openings to the ladies' and men's restrooms at each end.

The walls and ceiling of the auditorium are covered with pressed fiber tiles above a Masonite wainscoting (the wainscoting may be a later addition). The tiles are patterned to give the illusion of ashlar stone work. Along the tops of the walls a scalloped pattern also decorates frieze pattern creates an implied cornice line. The scalloped pattern also decorates the balcony wall. Decorative tile work also defines the proscenium opening. Other distinguishing interior features include the original sconces and a cross-shaped ceiling fixture set within a star-shaped pattern on the ceiling tiles. The sconces and ceiling fixture are capable of multi-color illumination. The theatre also retains its original seats. The movie screen has been removed, and the orchestra pit, which was never used, has been filled with concrete.

The balcony, which was designed for the use of black patrons, has symmetrical side extensions. 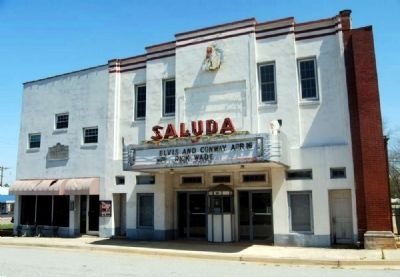 Photographed By Brian Scott, April 4, 2011
7. Historic Saluda Theater
Access to the balcony bypassed the main lobby by way of a stair corridor that opened on the rear of the building, with a landing at the top of the stair opening into the north extension of the balcony. The separate ticket booth which was originally at this landing has since been removed.

The two doors on the outermost bays of the front of the building served as exit doors for the lobby. A projection booth at the rear of the balcony above the lobby is flanked by a small office and restroom.

Significance
The Saluda Theatre was designed by Charles B. Thompson and completed by 1936. The theatre reflects a period of motion picture theatre construction that swept the country in the 1920s and 1930s. Like most other movie theatres constructed during the second decade of the period, the building was influenced by the Art Deco style. The Saluda Theatre is significant in the area of Architecture as an unusually intact example of a small town theatre in the Art Deco style and in the area of Entertainment/Recreation as a focal point for entertainment in the town of Saluda and surrounding rural areas in the 1930s and 1940s.

The Saluda Theatre was built for Neil Gunter Able in 1935-36 at a cost of about $25,000. Thompson, of Augusta, Georgia, was the architect, while Coke Bradley of Saluda was the contractor. Mrs. Able rented the building to Albert Burlewich, 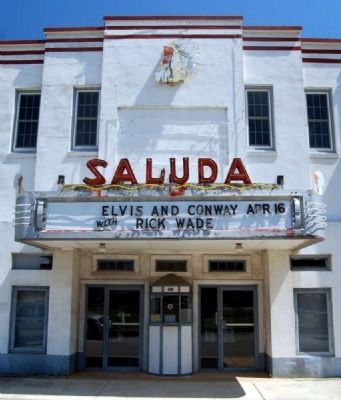 Photographed By Brian Scott, April 4, 2011
8. Historic Saluda Marker
and the theatre opened on July 4, 1936 with a Shirley Temple film as its first showing. Burlewich operated the theatre until 1939 when Mrs. Able's grandson, James Robert Herlong, rented the building and began managing the theatre; Herlong later purchased the theatre in 1946. The Saluda Theatre was open for forty-five years, closing in October 1981.[1]

The theatre is one of a small number of motion picture theatres with Art Deco architectural influences which survive in South Carolina. Theatres built across the country in the 1920s drew on practically every historical architectural style from the Egyptian Revival to the Spanish Colonial as owners tried to outdo their competitors with larger and more elaborate designs. During the 1930s, however, the Great Depression, the acoustical requirements of theatres showing motion pictures with sound, and a probably reaction against the stylistic excesses of the 1920s led to the predominance of the Art Deco style for cinema construction.[2] Art Deco features of the Saluda Theatre include the simplicity of its lines and its rejection of historical styles, and the Art Deco-influence is even more evident in the geometrical designs of the wall and ceiling tiles and the lighting fixtures on the interior. Other extant Art Deco-influenced theaters in the state include the Riviera Theatre in Charleston, the Palmetto 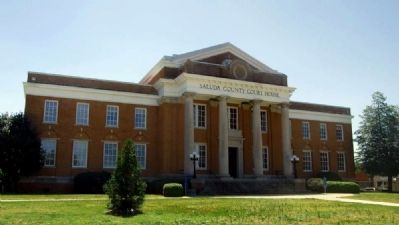 Photographed By Brian Scott, April 4, 2011
9. Second Saluda County Courthouse (1918)
Theatre in Hampton, and the Fox Theatre in Columbia. These theatres represent variations of the Art Deco style and a range of sophistication and detail. While the Saluda Theatre is one of the simplest of these buildings. It is also one of the most intact examples of its type.

Although Saluda was the county seat and the largest town in Saluda County, its population was only about 1,500 when the Saluda Theatre opened in 1936.[3] The theatre was a principal source of entertainment in Saluda and the surrounding rural area in the late 1930 and early 1940s. The theatre was open every night except Sunday and held regular matinees, when occasional promotional visits by movie stars such as William Lundigan, Kathleen Crowley, Douglas Morrow, Gaggy Hayes, and Lash LaRue. According to long-time theatre on Wednesday nights, which were promoted as "Bank Nights," with each ticket holder eligible to win cash prizes. On Friday and Saturday nights there were no empty parking spaces in Saluda because of the large crowds who filled the theatre.[4]

In 1987 the theatre was purchased by the Saluda County Council and donated to the Saluda County Historical Society, which has renovated it and uses it for dramatic presentations, music recitals, political rallies, and other community activities.[5]