A Reflection of Hope 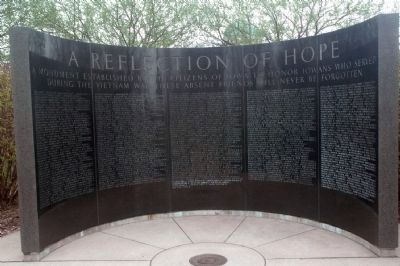 By Juris Bets, April 19, 2011
1. A Reflection of Hope Marker
Inscription.
A Reflection of Hope. . A Monument Established By The Citizens Of Iowa To Honor Iowans Who Served During the Vietnam War These Absent Friends Will Never Be Forgotten . This historical marker is in Des Moines in Polk County Iowa

Location. 41° 35.368′ N, 93° 36.134′ W. Marker is in Des Moines, Iowa, in Polk County. Marker can be reached from E Walnut Street. On the South Side Of The State Capital. Must park by the War of The Insurrection Monument on E Walnut Street and walk to it. Touch for map. Marker is in this post office area: Des Moines IA 50319, United States of America. Touch for directions.