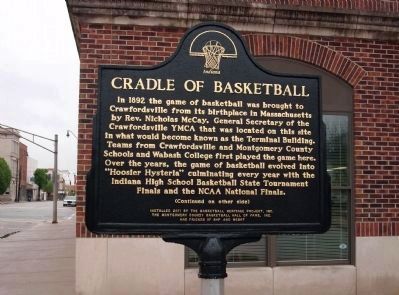 In 1892 the game of basketball was brought to Crawfordsville from its birthplace in Massachusetts by Rev. Nicholas McCay, General Secretary of the Crawfordsville YMCA that was located on this site in what would become known as the Terminal Building. Teams from Crawfordsville and Montgomery County schools and Wabash College first played the game here. Over the years, the game of basketball evolved into “Hoosier Hysteria” culminating every year with the Indiana High School Basketball State Tournament Finals and the NCAA National Finals. 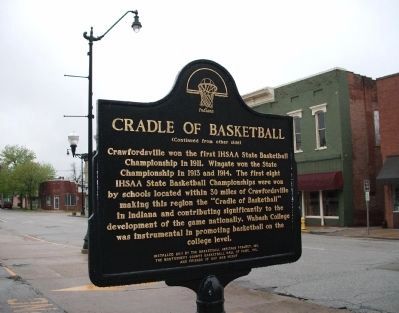 Click or scan to see
this page online
2011 by The Basketball Heritage Project, Inc., The Montgomery County Basketball Hall of Fame, Inc., and Friends of BHP and MCBHF.

Topics. This historical marker is listed in these topic lists: Education • Sports. A significant historical year for this entry is 1892.

Regarding Cradle of Basketball. In Crawfordsville's 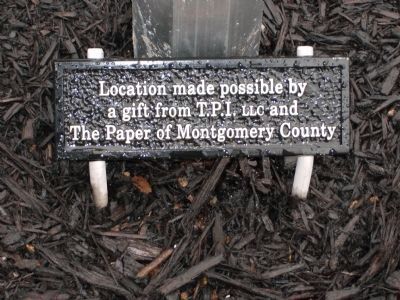 By Courtesy:: Marilyn S. Wolf, April 24, 2011
3. Small Plaque - - below "Cradle of Basketball" Marker
Location made possible by a gift from T.P.I. LLC and The Paper of Montgomery County
"journalreview.com" (4-18-2011 edition)::
On Saturday (4-16-2011) at the Athena Center in Crawfordsville - Chris May Executive Director of the Indiana Basketball Hall of Fame stated:: “Each year at our March coach’s meeting we recognize the teams which won the state title 25 and 50 years ago,” May said. “Now we are to the point we can honor those team from 100 years ago. We would like to present Crawfordsville High School a plaque in honor of that first state championship.”


In addition, May showed a flag representing Crawfordsville’s 1911 state title. The flag will fly at the Indiana Basketball Hall of Fame for one year and will then be given to the school.


May also brought with him the old county keg. The display was among one of the most popular. Many of those in attendance stopped to take pictures of the prized trophy which all the county schools battled for until consolidation. It is now housed as part of a permanent display at the Hall of Fame in New Castle.


“This is a great event,” May said. “I got here early this morning and was very impressed as soon as I walked in. You can’t help but feel the passion of this community for its basketball as soon as you walked in these doors. Montgomery County has a passion that is matched by few, if anyone else in the state.” 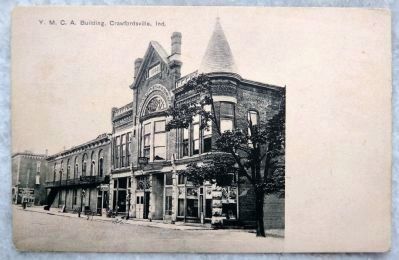 May 9, 2011
4. Old Postcard YMCA Crawfordsville Indiana
View of the YMCA...where the Basketball gym was located.
1. The Athenian Athlete. A History of Crawfordsville High School Athletics website homepage (Submitted on May 3, 2011, by Al Wolf of Veedersburg, Indiana.) 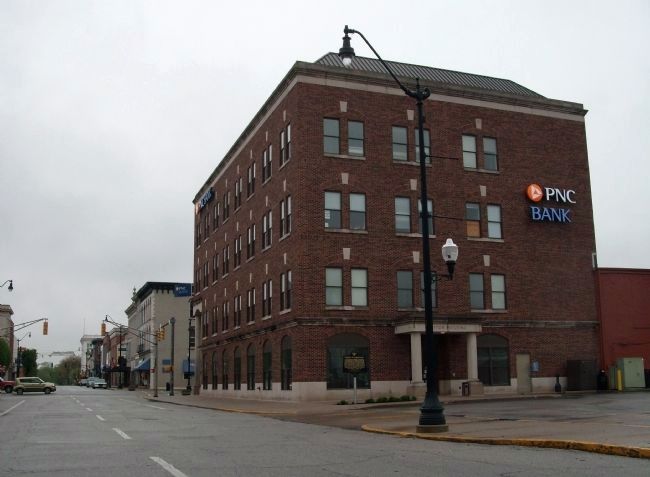 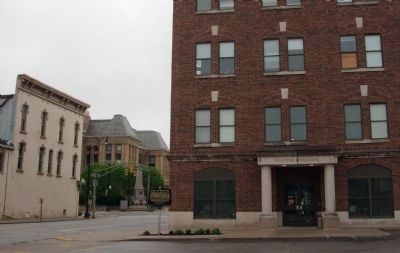 By Courtesy:: Marilyn S. Wolf, April 24, 2011
6. Other View - - Cradle of Basketball Marker
Montgomery County Courthouse can be seen in the background to the left. 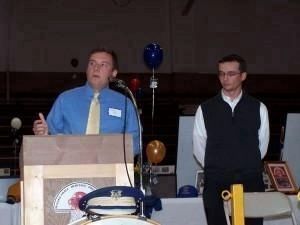 Editor’s want-list for this marker. Old photos of any type -and- also specifically for the 'old' Terminal Building itself. • • Can you help?
Share this page.