Dedicated to the Memory of Matthew B. Juan 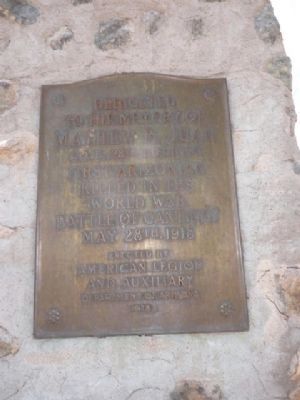 Dedicated to the Memory of
Matthew B. Juan
Co K 28th Infantry
First Arizonian Killed in the World War
Battle of Cantingy
May 28th 1918

Erected 1928 by American Legion and Auxiliary, Department of Arizona.

Topics. This historical marker is listed in these topic lists: Native Americans • War, World I. A significant historical date for this entry is May 28, 1918.

Location. 33° 4.849′ N, 111° 44.714′ W. Marker is in Sacaton, Arizona, in Pinal County. Marker is at the intersection of Casa Blanca Road and Sacaton Road, (Arizona Route 87), on the right when traveling east on Casa Blanca Road. First memorial in the Matthew Juan - Ira Hayes Memorial Park, added at this crossroads in 1928, after the war to end all wars. Touch for map. Marker is at or near this postal address: 190 West Pima Street, Sacaton AZ 85147, United States of America. Touch for directions.

Other nearby markers. At least 8 other markers are within 7 miles of this marker, measured as the crow flies. Dedicated to Ira H. Hayes USMC (a few steps from this marker); Honoring Native American Women Veterans (within shouting distance of this marker); Military Order Purple Heart of the U.S.A. 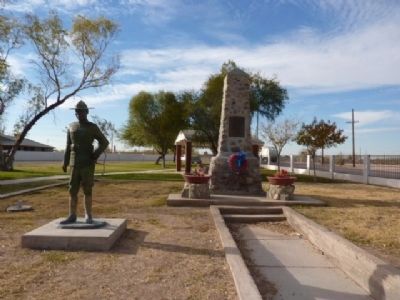 More about this marker. Note: the inscription on the marker reads: "Battle of Cantingy". Cantingy is mispelled. The correct spelling is "Cantigny".

Additional keywords. Matthew Juan, Akimel O'odham, Pima, Akimel Au-Authm, Akimel
Credits. This page was last revised on November 2, 2019. It was originally submitted on January 8, 2010. This page has been viewed 1,726 times since then and 28 times this year. Last updated on April 27, 2011, by Scott Ceravolo of Oro Valley, Arizona. Photos:   1, 2. submitted on January 8, 2010. • Syd Whittle was the editor who published this page.
Share this page.