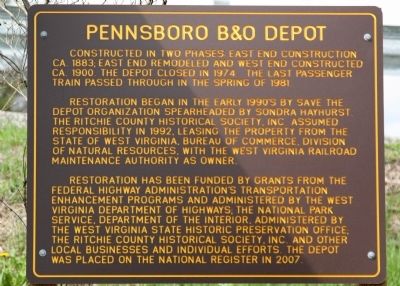 Photographed By J. J. Prats, April 17, 2011
1. Pennsboro B&O Depot Marker
Inscription.
Pennsboro B&O Depot. . , Constructed in two phases: east end construction circa 1883; east end remodeled and west end constructed circal 1900. The depot closed in 1974. The last passenger train passed through in the Spring of 1981. , , Restoration began in the early 1990s by Save the Depot Organization spearheaded by Sondra Hayhurst. The Ritchie County Historical Society, Inc., assumed responsibility in 1992, leasing the property from the State of West Virginia, Bureau of Commerce, Division of Natural Resources, with the West Virginia Railroad Maintenance Authority as owner. , Restoration has been funded by grants from the Federal Highway Administration’s transportation enhancement programs and administered by the West Virginia Department of Highways; the National Park Service, Department of the Interior, administered by the West Virginia State Historic Preservation Office; the Ritchie County Historical Society, Inc., and other local businesses and individual efforts. The Depot was placed on the National Register in 2007. . This historical marker is in Pennsboro in Ritchie County West Virginia

Restoration began in the early 1990s by Save the Depot Organization spearheaded by Sondra Hayhurst. The Ritchie County Historical Society, Inc., assumed responsibility in 1992, leasing the property from the State of West Virginia, Bureau of Commerce, Division of Natural Resources, with the West Virginia Railroad Maintenance Authority as owner. 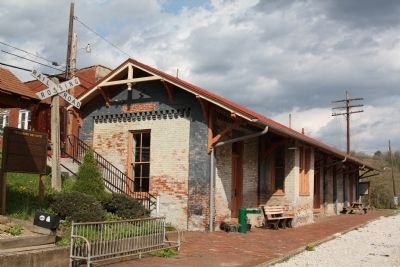 Photographed By J. J. Prats, April 17, 2011
2. Pennsboro B&O Depot and Marker
Marker is on the far left. This view is trackside, now the North Bend Rail-Trail. Collins Avenue is at the top of the stairway.

Click or scan to see
this page online
the Ritchie County Historical Society, Inc., and other local businesses and individual efforts. The Depot was placed on the National Register in 2007.

Topics and series. This historical marker is listed in this topic list: Railroads & Streetcars. In addition, it is included in the Baltimore and Ohio Railroad (B&O) series list. A significant historical year for this entry is 1883.

Location. 39° 17.1′ N, 80° 58.133′ W. Marker is in Pennsboro, West Virginia, in Ritchie County. Marker is on Main Street (West Virginia Route 74) just south of Collins Avenue, on the left when traveling north. Touch for map. Marker is in this post office area: Pennsboro WV 26415, United States of America. Touch for directions. 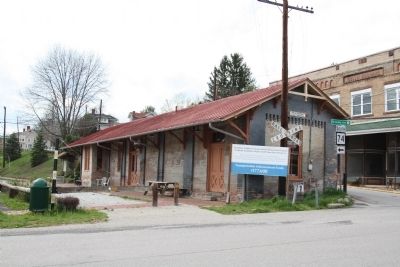 Also see . . .  Metropolitan Special. This daily train stopped at Pennsboro. “The Metropolitan Special was the workhorse passenger train of the Baltimore and Ohio Railroad (B&O) during the 1920s–1960s between New York City and St. Louis, Missouri, with major station stops in Washington, D.C., and Cincinnati, Ohio. The New York station was actually in Jersey City, New Jersey, with bus service to and from Manhattan. The Metropolitan Special carried vast amounts of mail and express packages in many (often 10+) baggage cars and express cars, and the train served various smaller towns and villages that were bypassed by the more prestigious trains along the route, the National Limited and the Diplomat. Added revenue for the train came from Railway Post Office cars, which sorted and canceled mail en route, 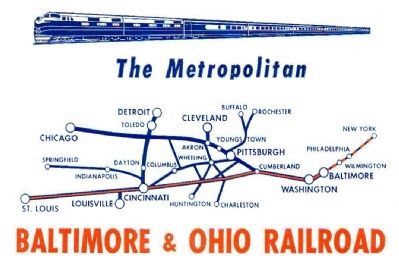 Additional commentary.
1. B&O Passenger Service
This was one of Baltimore and Ohio Railroad’s main lines west, between Baltimore-Washington and St, Louis. A 1944 timetable shows five B&O passenger trains in each direction on the Cumberland MD / Parkersburg WV / Cincinnati OH line that ran through Pennsboro. 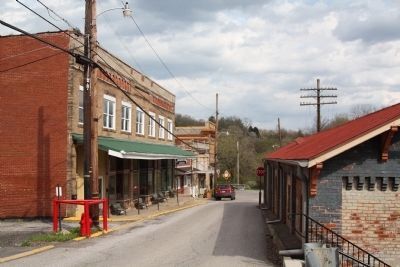 Photographed By J. J. Prats, April 17, 2011
5. Collins Avenue
The B&O Depot is on the right.
City at 6:30 AM. The dining cars on this train ran between Washington and Cincinnati to serve breakfast, lunch and dinner.

Unnamed train 29 to St. Louis passed Pennsboro without stopping a little after 2 PM. The return train No. 30 originating from Parkersburg to Washington and New York stopped at Pennsboro at 7:58 PM.

B&O’s crack trains No. 1 and 2, The National Limited passed through after midnight and did not stop on their way between Jersey City and St. Louis and Louisville (the westbound train split at Cincinnati; the eastbound trains from Louisville and from St. Louis were joined 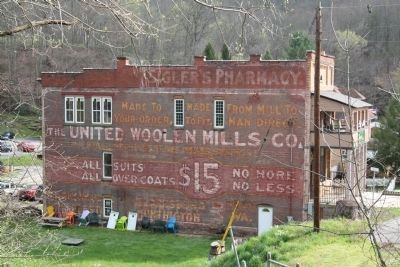 Photographed By J. J. Prats, April 17, 2011
6. View from the Track
Westbound passengers saw this advertisement from their left-side windows as their train slowed for the station.
into one at Cincinnati). Trains 3 and 4, The Diplomat, between Jersey City and St. Louis passed through a couple of hours later without stopping.

After Amtrak took over passenger service in 1971 from the nation’s private railroads it ran one train (in each direction) on this track with changing names: the West Virginian, until 1976 the Potomac Turbo, the Potomac Special, the Blue Ridge, and the Shennandoah. But Amtrak trains did not stop in Pennsboro. The last Amtrak Shennandoah passed through Pennsboro in 1981. In the present-day, the tracks have been removed.
— Submitted May 8, 2011, by J. J. Prats of Powell, Ohio.