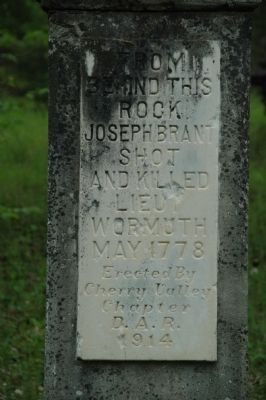 From
behind this
rock
Joseph Brant
shot
and killed
Lieut
Wormuth
May 1778
Erected by
Cherry Valley
Chapter
D.A.R.
1914 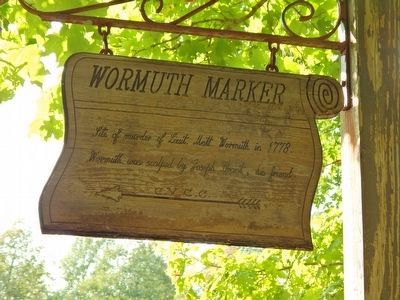 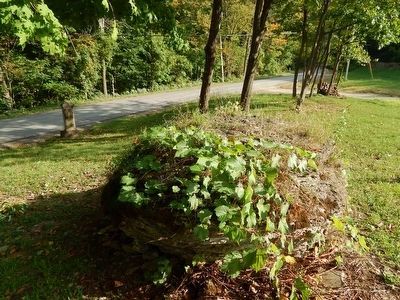 By Scott J. Payne, September 19, 2015
3. Lieutenant Wormuth Killed Marker
View from behind rock. This would have been Brant's viewpoint. 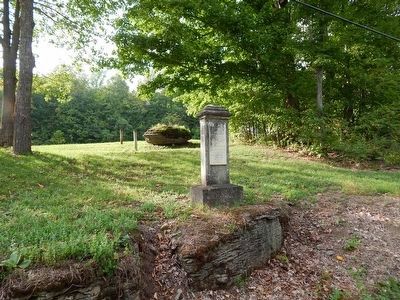 By Scott J. Payne, September 19, 2015
4. Lieutenant Wormuth Killed Marker
Here Brant lay in wait behind a large rock near the main road leading to the Mohawk River, about two miles north of Cherry Valley. A short distance from this the road wound along near the top of a ledge of rocks, forming a precipice one hundred and fifty feet high. It was shaded by evergreens and dark even in mid day. Its wildness was increased by the dashing of a small stream which fell over this precipice, called by the Indians the falls of the Tekaharawa. That day, Lieutenant Matthew Wormwood (Warmuth) came up from the Mohawk River and informed the garrison that Colonel Klock would arrive the next day with a part of his regiment of militia. It was almost night when he started to return, accompanied by Lieutenant Peter Sitz, the bearer of some dispatches. Throwing down his portmanteau he mounted his horse, saying he would not need it until his return on the morrow, with his company. The fine personal appearance of this young officer, who was clad in a rich suit of velvet, attracted much attention during his stay, and many persons remained at the door, looking at the horsemen until they were hid by the hill over which they passed. The clattering hoofs had scarcely died away when the report of a volley of musketry was heard. Soon after Wormwood's horse returned. The saddle was covered with blood, which excited fears for his fate but too well grounded. A party went out that evening but could make no discoveries. The next morning the body was found behind the rock before mentioned. They had arrived near the rock, when they were hailed, and ordered to stop. Disregarding the order they put spurs to their horses, and endeavored to pass. The Indians immediately fired; Wormwood was wounded and fell from his horse, when Brant, rushing out, tomahawked him with his own hand. They had been personal friends before the war and Brant is said to have lamented his death; at the time he supposed him to be a Continental officer. Lieutenant Sitz's horse was killed and he himself taken prisoner. The dispatches which he carried were double. He had presence of mind to destroy the paper containing the true account of the garrison, and to give Brant the other. Brant retried without doing any other injury. The next day, Colonel Klock arrived. The father of Wormwood (Peter), who had been immediately apprised of the death of his son was a wealthy man, living in Palatine District opposite Fort Plain, and this was his only son. His feelings as he bent over the dead and mutilated body were excruciating and when in the agony of his soul, he cried out "Brant, cruel, cruel Brant," tears started in many an eye which scarcely knew how to weep. Information from the following website: http://www.threerivershms.com/wormuth.htm 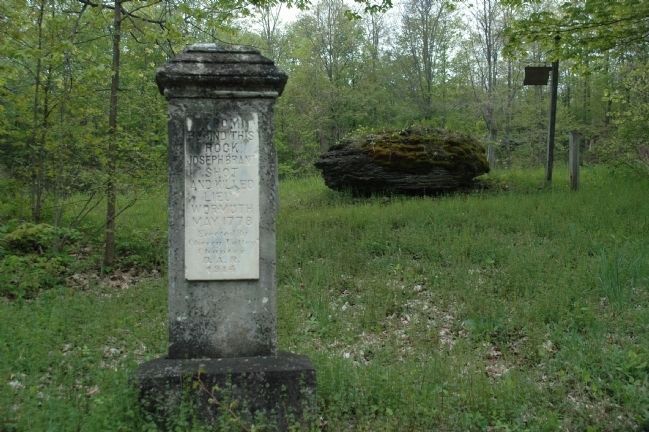 By Howard C. Ohlhous, May 14, 2011
5. Lieutenant Wormuth Killed Marker
Joseph Brant hid and fired from behind the large rock in the background. 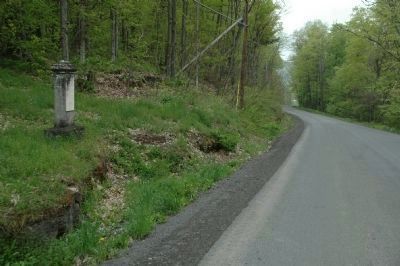