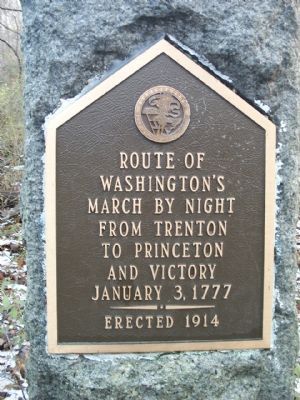 Photographed By Gary Nigh, December 2007
1. Route of Washington’s March Marker
List of related HMDb markers
Click for more information.
Inscription.
Route of Washington’s march by night from Trenton to Princeton and victory January 3, 1777 . This historical marker was erected in 1914 by Sons of the American Revolution. It is in Princeton Township in Mercer County New Jersey

Topics and series. This historical marker is listed in these topic lists: Roads & Vehicles • War, US Revolutionary. In addition, it is included in the Sons of the American Revolution series list. A significant historical date for this entry is January 3, 1862.

Location. 40° 19.659′ N, 74° 40.449′ W. Marker is in Princeton Township, New Jersey, in Mercer County. This marker is located in a forested area behind the Clarke house in the Princeton Battlefield State Park. Touch for map. Marker is in this post office area: Princeton NJ 08540, United States of America. Touch for directions. 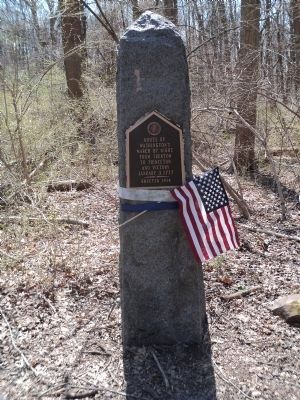 More about this marker. This is the twelfth in a series of 12 markers between Trenton and Princeton. 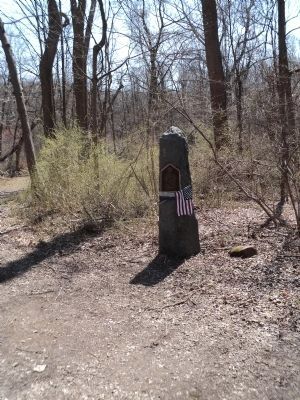 Photographed By Bill Coughlin, April 7, 2013
3. Marker on the Princeton Battlefield 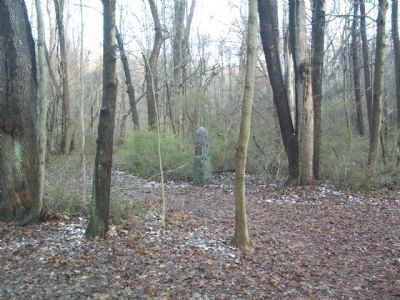