Near Site of First Capitol of the Republic of Texas 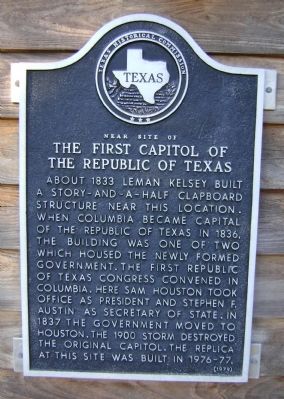 Near site of The First Capitol of the Republic of Texas

About 1833 Leman Kelsy built a story-and-a-half clapboard structure near this location. When Columbia became capital of the Republic of Texas in 1836, the building was one of two which housed the newly formed government. The First Republic of Texas Congress convened in Columbia. Here Sam Houston took office as President and Stephen F. Austin as Secretary of State. In 1837 the government moved to Houston. The 1900 storm destroyed the original capitol. The replica at this site was built in 1976-77.

Topics. This historical marker is listed in these topic lists: Settlements & Settlers • War, Texas Independence. A significant historical year for this entry is 1833.

Location. 29° 8.673′ N, 95° 38.533′ W. Marker is in West Columbia, Texas, in Brazoria County. Marker can be reached from the intersection of North 14th Street and Hamilton Street. The replica of the First Capitol of the Republic of Texas is located behind 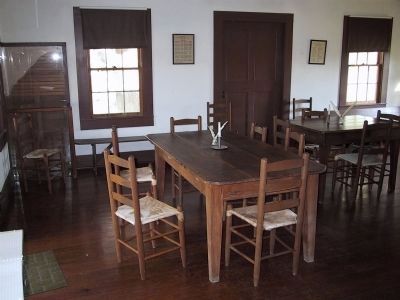 By Roger L. Mumby, August 9, 2004
2. The First Capitol of the Republic of Texas Marker
The interior of the replica depicts the furniture typical of the time period.

Click or scan to see
this page online
West Columbia City Hall. Touch for map. Marker is at or near this postal address: 512 E Brazos Ave, West Columbia TX 77486, United States of America. Touch for directions.

More about this marker. Following the March 2 signing of the Texas Declaration of Independence and the formation of an ad interim government, Ad Interim President David G. Burnet named Columbia (now West Columbia) as the location for the October 1836 meeting of Congress. Two buildings served as the House of Representatives and Senate with a number of smaller log houses serving as offices and committee rooms. Sam Houston, the hero of San Jacinto, was inaugurated as the republic’s first president in Columbia on October 22. The first Congress ratified the Constitution, provided an army and a navy, created the judicial branch and postal department, established a financial system, adopted an official flag and seal and defined the boundaries of the new republic. The original senate building was torn down in 1888. The original House of Representatives building, known as the “old capitol” was destroyed by the 1900 storm; a replica was constructed in 1977.

Tours of the replica are available by calling the Columbia Historical Museum at 979-345-6125.

Related marker. Click here for another marker that is related to this marker. The original site of the First Capitol is identified with a Texas State Historical Marker and the Capital of Texas Park. 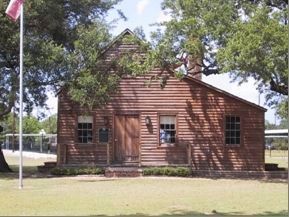