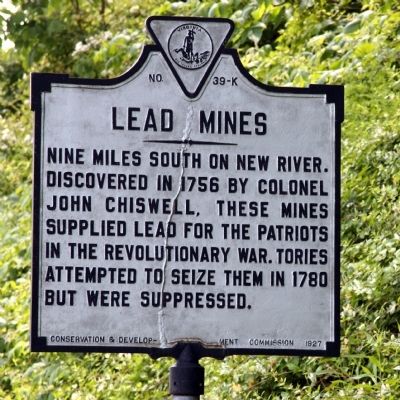 By J. J. Prats, May 28, 2011
1. Lead Mines Marker
Inscription.
Lead Mines. . Nine miles south on New River. Discovered in 1756 by Colonel John Chiswell, these mines supplied lead for the Patriots in the Revolutionary War. Tories attempted to seize them in 1780 but were suppressed. . This historical marker was erected in 1927 by Conservation & Development Commission. It is in Fort Chiswell in Wythe County Virginia

Nine miles south on New River. Discovered in 1756 by Colonel John Chiswell, these mines supplied lead for the Patriots in the Revolutionary War. Tories attempted to seize them in 1780 but were suppressed.

Topics. This historical marker is listed in these topic lists: Industry & Commerce • War, US Revolutionary.

Other nearby markers. At least 8 other markers are within 7 miles of this marker, measured as the crow flies. Anchor and Hope Plantation (a few steps from this marker); Fincastle County (approx. 4.8 miles away); Wythe County Poorhouse Farm (approx. 5.1 miles away); To Mark The Site of The Lead Mines (approx. 6.2 miles away); Walter Crockett 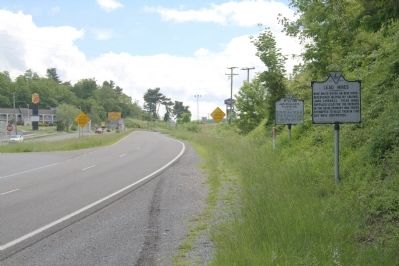 More about this marker. This marker was originally erected on U.S. Route 11, which has been replaced through these parts by Interstate 81.

Regarding Lead Mines. The nearby Jackson Ferry Shot Tower used to create lead shot by dropping molten lead from a height is still standing. There is a marker for the shot tower roadside on Route 52 south of here.

Also see . . .  Wikipedia entry for Withe County. “Lead was mined and shipped throughout the fledgling country; lead shot was also produced. Located near Fosters Falls, Jackson Ferry Shot Tower still stands as a testament to the citizens of Wythe County. Lead was hoisted to the top of the tower using block and tackle and oxen. The lead was melted in a retort and then poured through a sieve at the top of the tower. The droplets of molten lead would become round during the 150-foot descent. The shot would collect in a kettle of water and workers would enter through a 110-foot access tunnel located near the bank of the New River to retrieve the shot from the kettle.