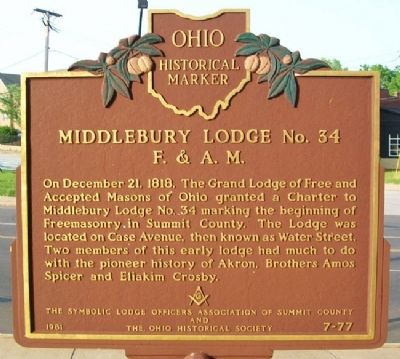 On December 21, 1818, The Grand Lodge of Free and Accepted Masons of Ohio granted a Charter to Middlebury Lodge No. 34 marking the beginning of Freemasonry in Summit County. The Lodge was located on Case Avenue, then known as Water Street. Two members of this early lodge had much to do with the pioneer history of Akron, Brothers Amos Spicer and Eliakim Crosby.

Topics and series. This historical marker is listed in these topic lists: Fraternal or Sororal Organizations • Settlements & Settlers. In addition, it is included in the Ohio Historical Society / The Ohio History Connection series list.

Location. 41° 4.256′ N, 81° 29.348′ W. Marker is in Akron, Ohio, in Summit County. Marker is at the intersection of Market Street and Exchange Street, on the right when traveling east on Market Street. Marker is on the grounds of Akron Fire Station No. 2. Touch for map 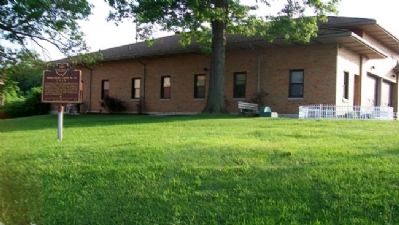