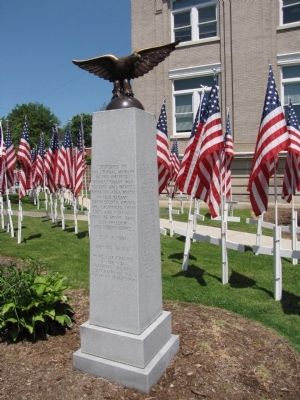 South Side
Dedicated to the eternal memory of the American Revolutionary War soldiers and patriots from the area which in 1832 became Smyth County, Virginia, who sacrificed their lives and fortunes that we might have our freedom and independence. 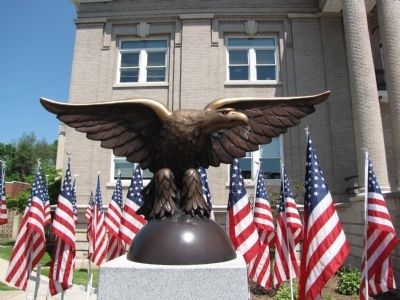 Topics. This historical marker and memorial is listed in these topic lists: Patriots & Patriotism • War, US Revolutionary. A significant historical year for this entry is 1832.

Location. 36° 49.966′ N, 81° 31.217′ W. Marker is in Marion, Virginia, in Smyth County. Marker is on West Main Street (State Highway 16) west of Church Street, on the right when traveling west. Memorial is located on the front lawn of the Smyth County courthouse. Touch for map. Marker is in this post office area: Marion VA 24354, United States of America. Touch for directions.

Other nearby markers. At least 8 other markers are within 2 miles of this marker, measured as the crow flies. Smyth County War Memorial (here, next to this marker); Marion (here, next to this marker); Confederate Memorial (within shouting distance of this marker); Col. Arthur Campbell (approx. 1.3 miles away); Site of Colonial Home (approx. 1.3 miles away); Royal Oak Presbyterian Church (approx. 1½ miles away); Sherwood Anderson (approx. 1.8 miles away); Battle of Marion (approx. 2 miles away). Touch for a list and map of all markers in Marion.
Credits. This page was last revised on June 16, 2016. It was originally submitted on June 23, 2011, by Lee Hattabaugh of Capshaw, Alabama. This page has been viewed 1,790 times since then and 133 times this year. Photos:   1, 2. submitted on June 23, 2011, by Lee Hattabaugh of Capshaw, Alabama. • Bill Pfingsten was the editor who published this page.
Share this page.