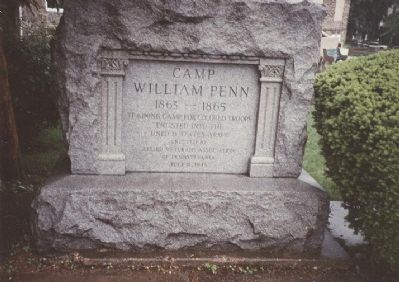 Topics. This memorial is listed in these topic lists: African Americans • War, US Civil. A significant historical month for this entry is July 1864.

Location. 40° 4.022′ N, 75° 8.505′ W. Marker is in Cheltenham Township, Pennsylvania, in Montgomery County. Memorial is at the intersection of Sycamore Avenue and Willow Avenue, on the right when traveling south on Sycamore Avenue. Touch for map. Marker is at or near this postal address: 1622 Willow Ave, Elkins Park PA 19027, United States of America. Touch for directions. 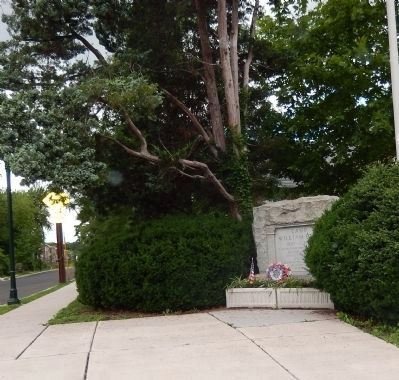 Click or scan to see
this page online
(approx. 0.8 miles away); Mexican-American War Monument (approx. 0.9 miles away). Touch for a list and map of all markers in Cheltenham Township.

Regarding Camp William Penn. Eleven U.S.C.T. regiments (the 3rd, 6th, 8th, 22nd, 24th, 25th, 32nd, 41st, 43rd, 45th, and 127th Colored Infantries), made up mostly of recruits from Pennsylvania, Delaware and New Jersey were trained at Camp William Penn. One of eight camps north of the Mason-Dixon Line to train Black soldiers, William Penn was the only one set up exclusively for that purpose.

Trainees decorated for valor include Medal of Honor recipients SgtMaj. Thomas Hawkins and 1stSgt. Alexander Kelley of the 6th U.S.C.I. for their conspicuous heroism at the Battle of New Market Heights (Chaffin’s Farm) in Virginia, 29 September 1864.

Also see . . .
1. Activities at Camp William Penn. The navitation menu on the left of this page offers additional background information about the "The Years of Camp William Penn." (Submitted on December 23, 2007, by Craig Swain of Leesburg, Virginia.)