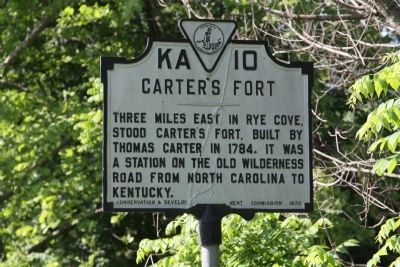 By J. J. Prats, May 29, 2011
1. Carter’s Fort Marker
Inscription.
Carter’s Fort. . Three miles east in Rye Cove stood Carter’s Fort, built by Thomas Carter in 1784. It was a station on the Old Wilderness Road from North Carolina to Kentucky. . This historical marker was erected in 1930 by Conservation & Development Commission. It is Near Duffield in Scott County Virginia

Three miles east in Rye Cove stood Carter’s Fort, built by Thomas Carter in 1784. It was a station on the Old Wilderness Road from North Carolina to Kentucky.

Topics. This historical marker is listed in this topic list: Settlements & Settlers. A significant historical year for this entry is 1784.

Location. 36° 43.21′ N, 82° 45.182′ W. Marker is near Duffield, Virginia, in Scott County. Marker is on Sunbright Highway (County Route 871) just north of County Route 650, on the right when traveling north. Approaching from the east on U.S 58/23/421, take Route 871 at Glenita to Natural Tunnel. It is a ways beyond the entrance to Natural Tunnel State Park. Touch for map. Marker is in this post office area: Duffield VA 24244, United States of America. Touch for directions. 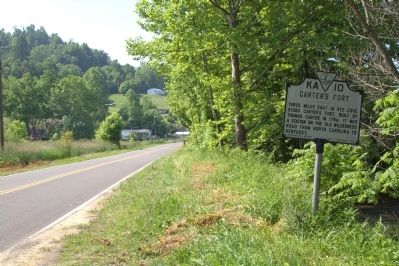 More about this marker. What is this 1930 marker doing on a secondary road? Until recently, official Virginia historical markers were only placed on primary roads such as U.S. and Virginia routes. The marker has not been moved. When this marker was placed, this roadway was U.S. 58. It was not until the 1960s that a bypass from Glenita to Dufields straightened out this dogleg, changing this roadway to a secondary road. A marker with this same title, KA-7, is on that bypass, today’s U.S. 23/58/421.

Also see . . .  Daniel Boone Wilderness Trail - Scott County Waypoints. “The Indians hotly contested the pioneers’ passage down the Wilderness Trail. The warfare lasted from 1774 to 1794, and was the bloodiest to occur within the United States. In 1776 the Cherokee drove out the militia garrisons in Lee County, leaving only the easternmost open. Carter’s Fort, in Scott County had to be abandoned. The Cherokee attacked as far east as Black's Fort in Abingdon. The life line to the Kentucky settlements were all but cut, but on at least two ocassions the militia of Carter's Fort from Rye Cove raced down the Wilderness Trail to save the settlements around Boonesborough.” (Submitted on July 10, 2011.)
Credits. This page was last revised on June 16, 2016. It was originally submitted on July 10, 2011, by J. J. Prats of Powell, Ohio. This page has been viewed 779 times since then and 5 times this year. Photos:   1, 2. submitted on July 10, 2011, by J. J. Prats of Powell, Ohio.
Share This Page.