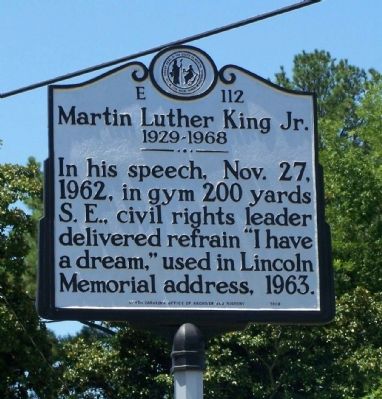 Location. 35° 57.177′ N, 77° 47.277′ W. Marker is in Rocky Mount, North Carolina, in Edgecombe County. Marker is on Atlantic Avenue (State Highway 97) near Spruce Street, on the right when traveling north. Touch for map. Marker is in this post office area: Rocky Mount NC 27801, United States of America. Touch for directions. 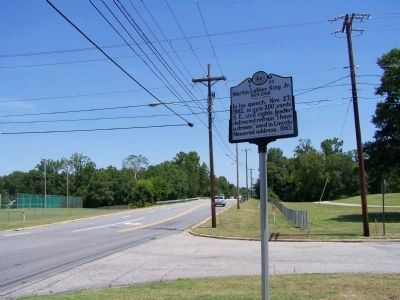 By Mike Stroud, July 18, 2011
2. Martin Luther King Jr. Marker, seen along Atlantic Avenue and Spruce Street
A speech by Martin Luther King, Jr. in Rocky Mount on November 27, 1962, has drawn much attention. In that address, before 1,800 in the gymnasium at Booker T. Washington High School (that building presently is a city recreation center gym), Dr. King used a number of expressions that made their way into the landmark speech at the Lincoln Memorial, part of the March on Washington on August 28, 1963. In Rocky Mount, Dr. King began by noting that he had been in North Carolina “many, many times” but that this was his “first time in this section.” (He paid multiple visits to Durham and Raleigh.)


Near the close he built toward these lines: “I have a dream that one day right here in Rocky Mount, the sons of former slaves and the sons of former slave owners will meet at the table of brotherhood, knowing that one God brought man to the face of the Earth. I have a dream tonight that one day my little daughter and my two sons will grow up in a world not conscious of the color of their skin, but only conscious of the fact that they are members of the human race. . . .”


Some have asserted that this marked the first use of the “I have a dream” phrase. Clayborne Carson, King Papers editor at Stanford University, has examined the address and declines to say that this was the first such use but states that it “appears 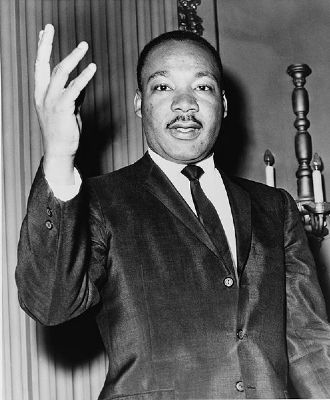 Library of Congress; Dick DeMarsico, World Telegram staff photographer
3. Martin Luther King Jr.
to be an important new rhetorical formulation.” Attorney Drew Hansen in 2003 published The Dream, a book-length account of the landmark speech. He indicates that the words were used in Albany, Georgia, prior to their use in Rocky Mount. Near the end of his life, in an interview, Dr. King recalled that the tired Georgia audience failed to be moved by the words. By the spring and summer of 1963 the words were among the most frequent of his set pieces.(North Carolina Office of Archives & History) 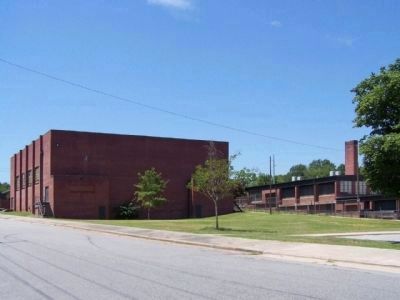