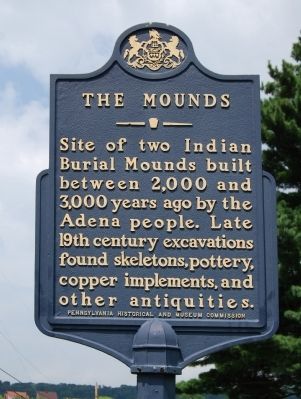 By Mike Wintermantel, July 24, 2011
1. The Mounds Marker
Inscription.
The Mounds. . Site of two Indian Burial Mounds built between 2,000 and 3,000 years ago by the Adena people. Late 19th century excavations found skeletons, pottery, copper implements, and other antiquities. . This historical marker was erected in 1948 by Pennsylvania Historical and Museum Commission. It is in Monongahela in Washington County Pennsylvania

Topics and series. This historical marker is listed in this topic list: Native Americans. In addition, it is included in the Pennsylvania Historical and Museum Commission series list.

Location. 40° 11.914′ N, 79° 55.953′ W. Marker is in Monongahela, Pennsylvania, in Washington County. Marker can be reached from the intersection of Mound Street and Indiana Street, on the right when traveling north. Located in Memorial Park. Touch for map. Marker is in this post office area: Monongahela PA 15063, United States of America. Touch for directions. 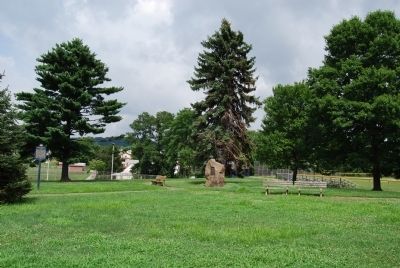