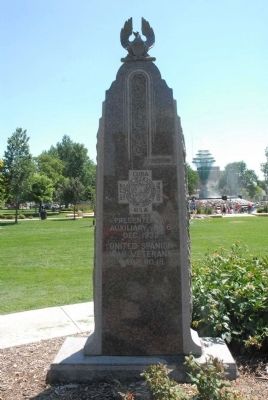 Topics. This historical marker is listed in this topic list: War, Spanish-American. A significant historical date for this entry is December 6, 1932.

Other nearby markers. At least 8 other markers are within walking distance of this marker. Mormon Trail (here, next to this marker); Civil War Memorial (here, next to this marker); Council Bluffs Veterans Plaza (about 300 feet away, measured in a direct line); Council Bluffs Free Public Library (about 600 feet away); Grenville M. Dodge (about 700 feet away); Squirrel Cage Jail (approx. 0.2 miles away); The National Humane Alliance Fountain (approx. ¼ mile away); The Historic General Dodge House (approx. 0.4 miles away). Touch for a list and map of all markers in Council Bluffs.
Credits. This page was last revised on June 16, 2016. It was originally submitted on July 26, 2011, by Charles T. Harrell of Woodford, Virginia. This page has been viewed 571 times since then and 5 times this year. Photo   1. submitted on July 26, 2011, by Charles T. Harrell of Woodford, Virginia. • Bill Pfingsten was the editor who published this page.
Share This Page.