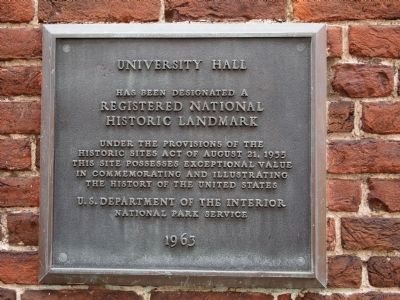 Photographed By Bryan Simmons, July 26, 2011
1. University Hall Marker
Inscription.
University Hall. . Has Been designated a Registered National Historic Landmark , Under the provisions of the Historic sites act of August 21 1935 , This site possess exceptional value in commemorating and illustrating the history of the united states of America , US Department of interiors , National Park Services , 1963 . This historical marker was erected in 1963. It is in Providence in Providence County Rhode Island

Topics and series. This historical marker is listed in this topic list: Education. In addition, it is included in the National Historic Landmarks series list. A significant historical year for this entry is 1935. 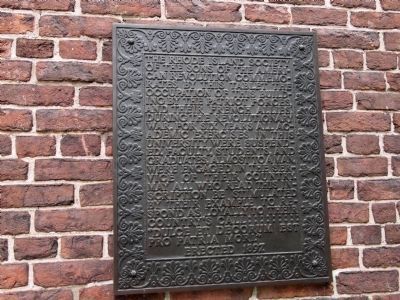 Photographed By Bryan Simmons, July 26, 2011
2. University Hall Marker
The Rhode Island Society of the Sons of the American Revolution commemorates by this tablet the occupation of this building by the patriot forces, and their French allies, during the Revolutionary War. For six years all academic exercises in this university were suspended. Faculty, students, and graduates, almost to a man, were engaged in the service of their country. May all who read this inscription be stimulated by their example to respond as loyally to their country's call.
"Dulce et Decorum est Pro Patria Mori." Erected 1897 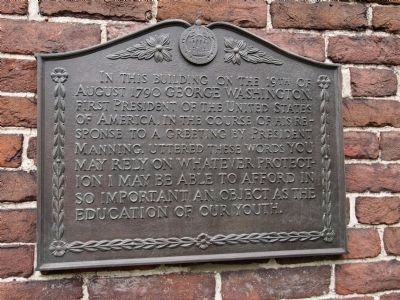 Photographed By Bryan Simmons, July 26, 2011
3. University Hall Marker
In this building on the 19th of August 1790 George Washington, First President of the United States of America, in the course of his response to a greeting by President Manning, uttered these words You may rely on whatever protection I may be able to afford in so important an object as the education of our youth. 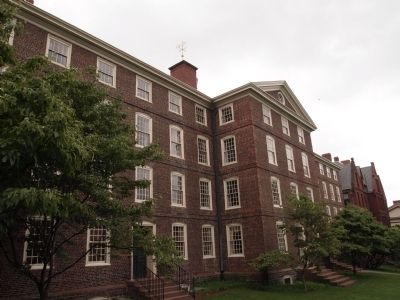