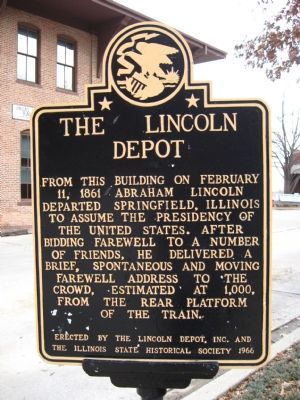 By Angie Shaffer, January 7, 2008
1. The Lincoln Depot Marker
Inscription.
The Lincoln Depot. . From this building on February 11, 1861 Abraham Lincoln departed Springfield, Illinois to assume the Presidency of the United States. After bidding farewell to a number of friends, he delivered a brief, spontaneous and moving farewell address to the crowd, estimated at 1,000, from the rear platform of the train. . This historical marker was erected in 1966 by The Lincoln Depot, Inc., and the Illinois State Historical Society. It is in Springfield in Sangamon County Illinois

From this building on February 11, 1861 Abraham Lincoln departed Springfield, Illinois to assume the Presidency of the United States. After bidding farewell to a number of friends, he delivered a brief, spontaneous and moving farewell address to the crowd, estimated at 1,000, from the rear platform of the train.

Erected 1966 by The Lincoln Depot, Inc., and the Illinois State Historical Society.

Topics and series. This historical marker is listed in this topic list: Railroads & Streetcars. In addition, it is included in the Former U.S. Presidents: #16 Abraham Lincoln, the Illinois State Historical Society, and the Lincoln 1861 Inaugural Train Stops series lists. 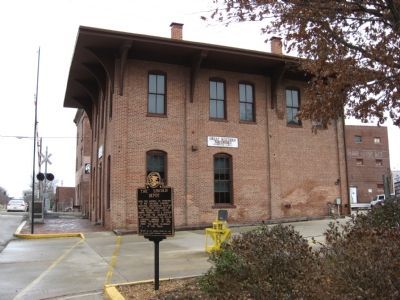 The 1,904 mile adventure filled journey from Springfield to Washington would take twelve days (February 11th to the 23rd) of which he traveled ten days by train. No traveling occurred on two of the days (Sunday - the 17th and Wednesday - the 20th). Leaving on a Monday the Train Trip 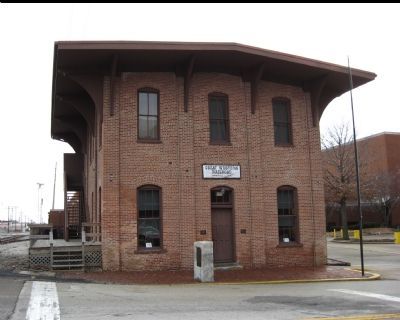 By Angie Shaffer, January 6, 2008
3. Front of the Lincoln Depot
was completed by 6:00 AM the second Saturday following. It was planned for him to travel during day light hours. Once off the train for the “travel day,” late afternoons and evenings held a number of public gatherings and other meetings.

Lincoln’s trip involved: stopping at approximately 89 towns or cities in eight states, 18 railroad companies, changing trains to accomodate the different gauges of track along the route, over 24 Steam Locomotives with over 23 additional Steam Locomotives acting as “Pilot Engines” making sure the rails and area were safe (the majority of the locomotives were wood fired - only two were coal fired), the traveling speed was around 30 MPH (though traveling through upper New York state was at 40 MPH)), traveling between 8:00 AM and 4:30 PM each day, only five planned locations along the way to stop and eat lunch, two ferries and one foot bridge. The weather was anything from cold and sunny, raining, or blowing snow storms. The “Presidential Special” train was usually three passenger cars, one luggage car, an engine tender, and the steam locomotive. Lincoln, his family, and the Presidential Party road in the last car.

His wife, Mary Todd Lincoln, did not start - nor - finish the trip with Lincoln. She and the small children, among others, had an even more grueling train ride to start the 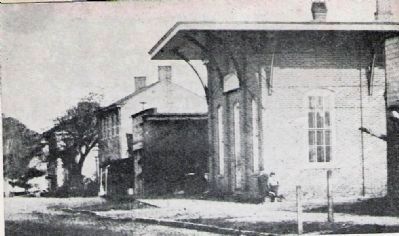 Courtesy of the National Park Service
4. Original Depot
The "Great Western Depot" was originally a one-story structure used for passenger and freight when Lincoln left Springfield. The second story was added latter.
journey. They left Springfield latter in the evening (at 6:10 PM) on a sleeper car. Abraham had already arrived in Indianapolis at 5:00 PM. Since Mary was traveling on a sleeper car all night, her journey was along the Chicago route, arriving in Lafayette, Indiana at 5:45 AM.

With a near two hour lay over in Lafayette, they left at 7:20 AM. She and her group met up with Abraham and his group on his train at Union Station - Indianapolis, Indiana and headed out of Indianapolis together at 11:00 AM. General Winfield Scott, head of the military, suggested that all the family travel together for ease of security.

On the final leg of journey into Washington, D. C., Abraham traveled incognito overnight without the family due to rumors of a possible assassination attempt. Again Mary and the rest of the group caught up with him a little after 5:30 PM on Saturday, February 23rd - a cold rainy Winter day.

Since dinning cars were not invented yet, travelers had to take along their own food and drink unless there was a planned “eating stop.” Of the five “planned” eating stops for lunch, one of them (Xenia, Ohio) was empty of food due to the large hungry crowd that gathered waiting for Lincoln’s train. After a short few minutes and brief speech, his train was off and running again. Due to necessary security his food supply 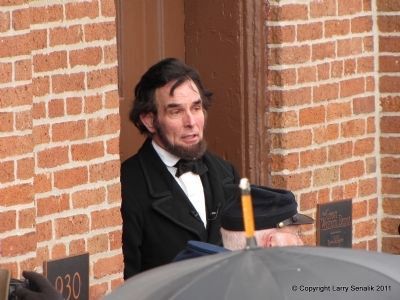 By Larry Senalik, February 11, 2011
5. Abraham Lincoln (Fritz Klein) delivers his farewell address
150th anniversary of Lincoln's Farewell Address on February 11, 2011
was guarded and kept safe without the knowledge of the public, and at times without Lincoln’s knowledge.

Portable telegraph equipment and an telegraph operator was part of the Presidential Party and was at full access for Lincoln’s use only. Many items of communication had to be conducted over the journey in progress. Ironing out on upcoming stops, reporting the progress of completed travel, and other highly important government planning business kept the telegraphy busy.

State Officials rode on the “Presidential Special” through their respective State. This allowed for personal greetings, political horse trading, and more added security for the Presidential Party. Presidential protocols always specified that the State was safely escort the President through their State. Lincoln thusly was very busy during the train trip. When the train stopped he met the general public and made brief speeches. When the train was in motion he was surrounded by official State representatives. Newspapermen were also on the “Presidential Special” looking for information and interviews.

Lincoln used this trip to see the country's geography, gather the general attitudes of the people, and build the support of the populace and officials at all State and Federal levels before beginning his terms in Office as President. 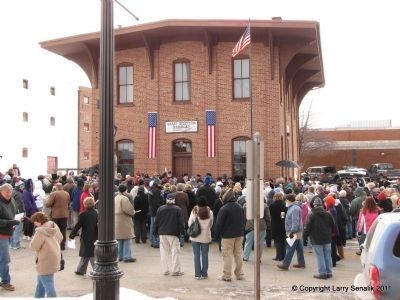 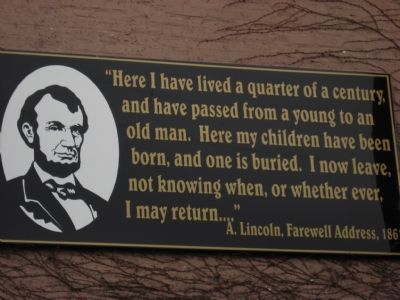 By Angie Shaffer, January 6, 2008
7. Excerpt from Lincoln's speech
"Here I have lived a quarter of a century, and have passed from a young to an old man. Here my children have been born, and one is buried. I now leave, not knowing when, or whether ever, I may return...."
A. Lincoln, farewell address, 1861 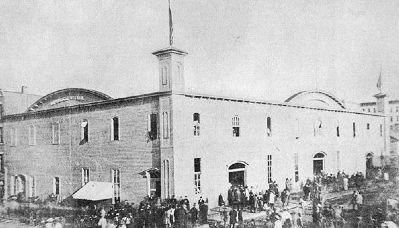 Courtesy: Chigago Historical
8. Chicago "Wigwam"
The National Republican Convention was held in this new wooden structure in Chicago, Illinois. It is here that Abraham Lincoln's team was able to get Lincoln nominated as a candidate. "Wigwam" was known in 1860's as an Indian name for "temporary place." The public took to the name: calling those that met at the "Wigwam" as the Big Political Chiefs of the Country.