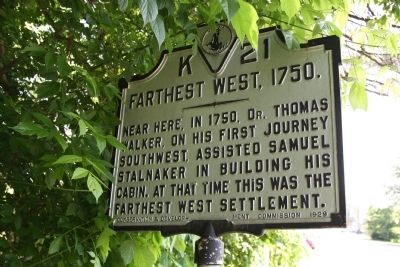 By J. J. Prats, May 29, 2011
1. Farthest West, 1750 Marker
Inscription.
Farthest West, 1750. . Near here, in 1750, Dr. Thomas Walker, on his first journey southwest, assisted Samuel Stalnaker in building his cabin. At that time his was the farthest west settlement. . This historical marker was erected in 1929 by Conservation and Development Commission. It is in Chilhowie in Smyth County Virginia

Near here, in 1750, Dr. Thomas Walker, on his first journey southwest, assisted Samuel Stalnaker in building his cabin. At that time his was the farthest west settlement.

Topics. This historical marker is listed in these topic lists: Colonial Era • Settlements & Settlers. A significant historical year for this entry is 1750. 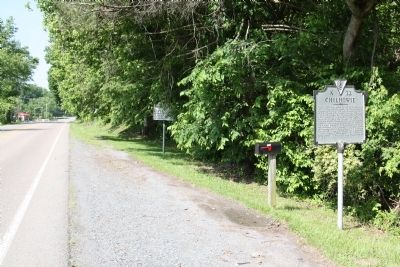 Click or scan to see
this page online
(approx. ¾ mile away); William Campbell’s Grave (approx. 2½ miles away); Fort Kilmachronan (approx. 2.9 miles away); Seven Mile Ford (approx. 3.4 miles away). Touch for a list and map of all markers in Chilhowie.

Also see . . .  Dr. Thomas Walker’s Journal, 1750. Transcribed by Carole Hammett. Footnote 13: “...Samuel Stalnaker was probably, as his name indicates, one of the early pioneers from the Lower Shenandoah Valley or from Penn. of German descent, the family having numerous representatives in the Valley. He was doubtless a hunter and Indian trader who had visited the Cherokees and was acquainted with the route to Cumberland Gap, upon which Dr. Walker had never been or he would not have needed a guide. It was from him evidently that Dr. Walker received information as to certain localities he was about to visit, as Clinch River, Cave Gap, and other points of which as he advanced into Kentucky, he gave previous information. It was not improbable that the route from the Ohio River to the Cumberland Gap and the Cherokee country, which at that time was defined and known as ‘the Warriors Path’ was travelled by hunters and traders, and that Stalnaker was acquainted with it personally or from others. On Fry and Jefferson’s Map, 1751, Stalnaker’s settlement is put down as the extreme western habitation. ... Stalnacker’s was a noted place in colonial days. The command of Col. Wm. Byrd, III, of Westover, encamped there during the winter of 1760-1761 before proceeding to the Tennessee Country against the Cherokees. Stephen Holston’s cabin was on the head-springs of the Middle Fork of Holston River about nine miles above Stalnacker’s. Holston did not remain there long. Disposing of his ‘corn rights’—to a hundred acres for each acre planted in corn—to James Davis, Holston and a party of friends constructed canoes and passed down the river into the Tennessee, the Ohio and the Mississippi as far as Natchez. This notable adventure fixed his name to Holston River. No record of the journey exists; Holston was not a journalizer. As Walker’s Journal indicates, that stream was so called in 1750. ...” (Submitted on August 10, 2011.)
Credits. This page was last revised on June 16, 2016. It was originally submitted on August 10, 2011, by J. J. Prats of Powell, Ohio. This page has been viewed 808 times since then and 43 times this year. Photos:   1, 2. submitted on August 10, 2011, by J. J. Prats of Powell, Ohio.
Share This Page.