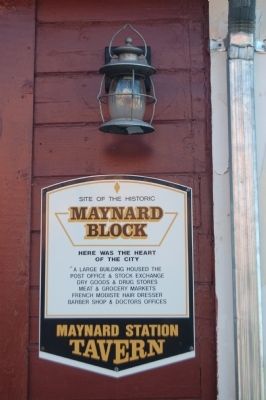 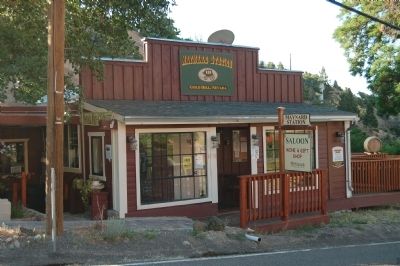 Photographed By Barry Swackhamer, July 23, 2011
2. Maynard Station
The marker is located on the right side of the building.

More about this marker. Also located on the Maynard Station are two 'markers' entitled "If This House Could Talk."

Additional commentary.
1. If This House Could Talk - Marker #1 (See Photo #4)
Important Buildings:
Maynard Block
As is the case with photographs of the town, contemporary information on Gold Hill for the years 1860 and 1861, the same years most of the building of Gold Hill and Virginia City was carried out, is non-existent or yet to be discovered.

The Maynard Block’s origins are obscure. It has been determined that the southern-most section was built first as a one-story structure to serve as a bank. The northern section was added in late 1863. In 1872, and a second story was added to the original one-story section, completing the building as a total two-story block. The mortar from the original roof was assayed at $27.50.

The building was named after its builder and owner, distinguished citizen and pioneer banker, Henry G. Maynard. Maynard was first an agent of Wells Fargo & Company and Express office, Gold Hill, before forming 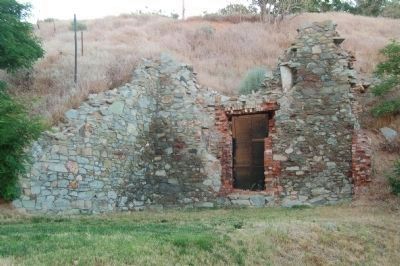 Photographed By Barry Swackhamer, July 23, 2011
3. Ruins of the Maynard Block
his own bank. Maynard operated the bank (with time off for a disastrous attempt to retire in Boston) with various partners until it closed in 1873 and was turned into a saloon. The once-wealthy Maynard died broke in the county hospital in Reno.

Over the years, the building had many different tenants, a hardware store, grocery store, hotel and restaurant, saloons, offices for doctors and lawyers, but perhaps it was best known as an informal stock exchange for the many brokers who had their offices there. The area in front was reputed to be called “two-bit flat” where crowds gathered to watch quotations and buy and sell stocks. It was here in 1865, preceded by booming of the cannon, shrieking of the whistles and ringing of bells, that Maynard introduced Union General William S. Rosecrans to the people of Gold Hill.

In its final years, the building housed a grocery store and the post office. It was torn down in 1940. Some remains of the building are visible behind today’s Maynard Station.
— Submitted August 22, 2011.
2. If This House Could Talk - Marker #2 (See Photo #5)
The History of Nevada
Early in 1862, H.G. Maynard opened a bank at Gold Hill, Nevada. He had previously been the agent of Wells Fargo & Co. express at Gold Hill. In the latter 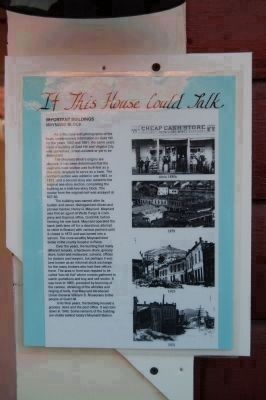 Photos displayed on the marker are of the building from circa 1880's, 1878, 1925 and 1931.
part of the same year, J.W. Flood became a partner of H.G. Maynard. Maynard & Flood continued in business about two years, when J.W. Flood went to San Francisco, where he became a trusted employee in the banking house of Donohoe, Kelley & Co. After having occupied that position for a number of years, he was proven to be defaulter for a large amount of money, and was sentenced to imprisonment for six years. It was currently reported that the shock given to Joseph Donohoe through the defalcation of J.W. Flood, who had for many years been regarded by Donohoe, to be a man of rare excellence, and a highly esteemed friend, caused the death of Donohoe, who died a very short time after Flood had been sentenced to State prison. The business of Maynard & Flood at Gold Hill was continued by H.H. Flagg. Maynard had retired a rich man, with more than $100,000 in bonds, and $1,800 per month in rents from his Gold Hill property being collected by H.H. Flagg and remitted to him in Boston, Massachusetts, where he had bought a dwelling on Tremont Street, in which with his family, he abode. About the year 1872 Maynard returned to Gold Hill, and reported that his Boston life had been financially disastrous.

A short time after the return of Maynard to Gold Hill the bank of H.H. Flagg failed. Trustees were appointed and they succeeded in paying the creditors about sixty cents on the dollar. 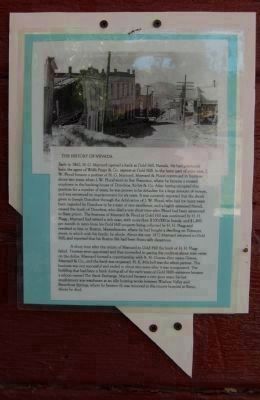 Photographed By Barry Swackhamer, July 24, 2011
5. If This House Could Talk Marker #2
The History of Nevada
See Comment #2 for inscription.

Photo displayed on marker is an early Gold Hill street view.
Maynard formed a copartnership [sic] with R.N. Graves – firm name Graves, Maynard & Co., and the bank was reopened. H.K. Mitchell was the silent partner. The business was not successful and ended in about two years after it was inaugurated. The building that had been a bank during all of the early years of Gold Hill’s existence became a saloon named The Bank Exchange. Maynard became a very poor man; his last employment was watchman at an idle hoisting works between Washoe Valley and Steamboat Springs, where he became ill; was removed to the county hospital at Reno, where he died.
— Submitted August 22, 2011.
Credits. This page was last revised on June 21, 2016. It was originally submitted on August 13, 2011, by Barry Swackhamer of Brentwood, California. This page has been viewed 692 times since then and 52 times this year. Photos:   1, 2, 3, 4, 5. submitted on August 13, 2011, by Barry Swackhamer of Brentwood, California. • Syd Whittle was the editor who published this page.
Share this page.