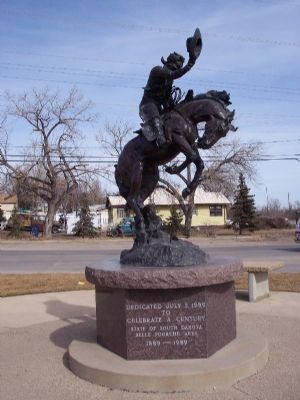 Erected 1989 by City of Belle Fourche.

Other nearby markers. At least 2 other markers are within 3 miles of this marker, measured as the crow flies. Welcome to Belle Fourche (approx. 0.8 miles away); Minnesela, So. Dak. (approx. 2.6 miles away).

Regarding Lasting Legacy. The town of Belle Fourche was founded in 1891. The town was started when the railroad bypassed Minnesela, then the trade center and county seat. They built shipping pens on Middle Creek west of town and a depot at the old Belle Fourche River Crossing.

No one can dispute the name that early French explorers and trappers tagged onto the bustling little city of Belle Fourche. At a junction about a mile east of the center of town, the swift, turbulent waters of Redwater Creek empty into the placid, slow moving Belle Fourche River. It was because of this junction that the founders named it aptly, Belle Fourche, meaning Beautiful Forks in the French language

Early in the century, settlers realized that the broad valley extending northeast of Belle Fourche would be ideal for raising small grain and farming if water was available. Belle Fourche became a trade center and fun spot for cow punchers, sheep ranchers and farmers in the vast area. The Northwestern railroad was quick to recognize the potential of the town as a shipping point and soon built their line from Whitewood to Belle Fourche and on to Newell. At the turn of the century the city was the largest livestock shipping point in the entire West.
Credits. This page was last revised on June 16, 2016. It was originally submitted on January 7, 2008, by Kevin W. of Stafford, Virginia. This page has been viewed 1,753 times since then. Photo   1. submitted on January 7, 2008, by Kevin W. of Stafford, Virginia.
Share This Page.