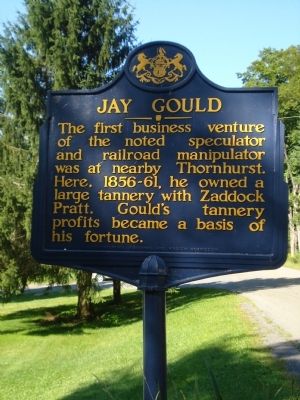 August 17, 2011
1. Jay Gould Marker
Inscription.
Jay Gould. . The first business venture of the noted speculator and railroad manipulator was at nearby Thornhurst. Here, 1856 ~ 61, he owned a large tannery with Zaddock Pratt. Gould's tannery profits became a basis of his fortune. . This historical marker was erected in 1947 by Pennsylvania Historical and Museum Commission. It is in Thornhurst in Lackawanna County Pennsylvania

The first business venture of the noted speculator and railroad manipulator was at nearby Thornhurst. Here, 1856 ~ 61, he owned a large tannery with Zaddock Pratt. Gould's tannery profits became a basis of his fortune.

Topics and series. This historical marker is listed in these topic lists: Industry & Commerce • Railroads & Streetcars. In addition, it is included in the Pennsylvania Historical and Museum Commission series list. A significant historical year for this entry is 1856.

Location. 41° 10.492′ N, 75° 35.309′ W. Marker is in Thornhurst, Pennsylvania, in Lackawanna County. Marker is on River Road just east of Pennsylvania Route 2016, on the right when traveling east. Touch for map. Marker is in this post office area: Pocono Lake PA 18347, United States of America. Touch for directions.

Other nearby markers. At least 8 other markers are within 6 miles of this marker, measured as the crow flies. A different marker also named Jay Gould (approx. half a mile away); Eschenbach Cemetery (approx. 3.3 miles away); The Battle of Locust Ridge (approx. 3.6 miles away); 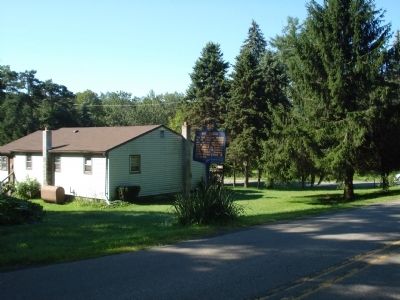 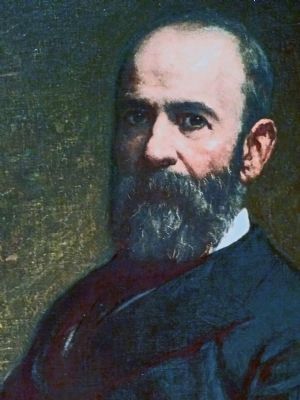 “Jay Gould had one of the most turbulent, controversial, and significant business careers in the nineteenth century. Largely self-taught, incredibly strong-willed and intelligent, Gould made his first fortune with his masterful understanding of finance during the Civil War. Postwar, he came to public attention in his protracted financial ‘war’ against Cornelius Vanderbilt over the Erie Railroad. Gould's dizzying financial maneuvering and his attempt to corner the market in gold cemented his reputation as a predatory capitalist or robber baron. But Gould's talents and achievements were greater than this caricature. During the second half of his career, he established himself as an innovative and creative businessman, reviving the moribund Union Pacific Railroad and turning it into an efficient and profitable transportation system. Ruthless but never a mere speculator, Gould's wide-ranging influence on business, from the financial markets to modern management techniques, helped shape the modern American economy.” — National Portrait Gallery
Credits. This page was last revised on June 16, 2016. It was originally submitted on August 18, 2011. This page has been viewed 655 times since then. Last updated on August 20, 2011. Photos:   1, 2. submitted on August 18, 2011.   3. submitted on May 2, 2015, by Allen C. Browne of Silver Spring, Maryland. • Bill Pfingsten was the editor who published this page.
Share this page.