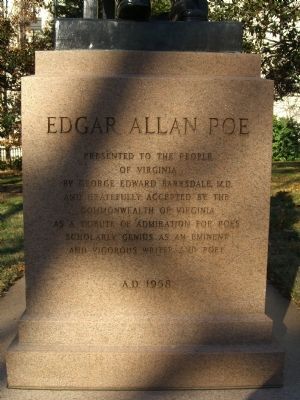 By Kevin W., January 3, 2008
1. Edgar Allen Poe Marker
Inscription.
Edgar Allen Poe. . Presented to the people of Virginia by George Edward Barksdale, M.D. and gratefully accepted by the Commonwealth of Virginia as a tribute of admiration for Poe's scholarly genius as an eminent and vigorous writer and poet. . This historical marker was erected in 1958 by George Edward Barksdale, M.D.. It is in Richmond Virginia

Presented to the people of Virginia by George Edward Barksdale, M.D. and gratefully accepted by the Commonwealth of Virginia as a tribute of admiration for Poe's scholarly genius as an eminent and vigorous writer and poet. 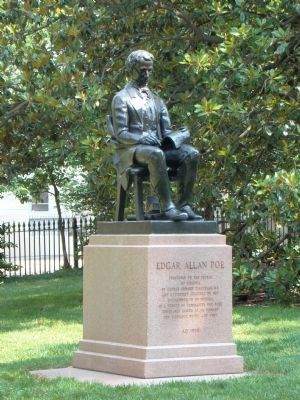 More about this marker. Charles Rudy created this sculpture in 1957, and cast it at the Modern Art Foundry of New York. It features a seated portrait of Edgar Allan Poe holding a writing tablet in his proper left hand and a pen in his proper right hand. Three books are piled beneath his chair. The sculpture rests on a square granite base. The bronze sculpture stands approximately five feet tall on a four foot pink granite base.

The sculpture, which cost $9,500, was a gift of retired Richmond physician and Poe admirer, Dr. George Edward Barksdale, who wanted the city's visitors to remember Edgar Allan Poe's connection to Richmond. Although Poe was born in Boston, he was adopted by a Richmond family when he was three and raised in Richmond, later attending the University of Virginia and working for a time in Virginia. The sculpture was finished in 1957, but languished in a warehouse pending approval of a suitable site on Capitol Square. In January 1958, installation plans were set in motion by a state appropriation of $2,500 to place the sculpture in Capitol Square. 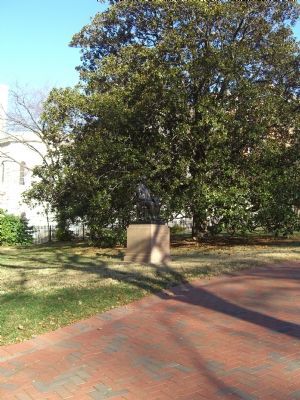 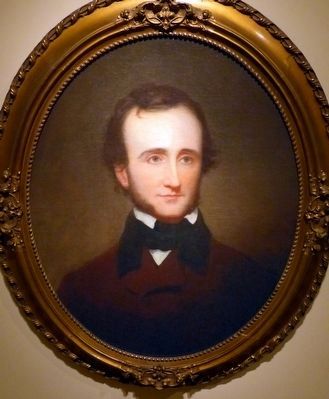 “Edgar Allan Poe is popularly known for his poem ‘The Raven’ (1844), and like the raven itself, Poe was a dark presence amid the optimism of early American culture. Not for him was the glorification of the individual or the celebration of nature as life-giving. Poe peeled back the underside of America to sketch a world in which nothing, especially human motivation, was transparent, predictable, or even knowable. In their dark, hallucinatory imagery, Poe's writings profoundly influenced such European poets as Baudelaire and Rimbaud. In America, his voice is still singular for the strength with which it spoke against the spirit of the Romantic age in which he lived. Poe's great subject was death, and he seemed to court it in his life as well as art, dying early after proving himself unable to function in the society he dissected so remorselessly.” — National Portrait Gallery 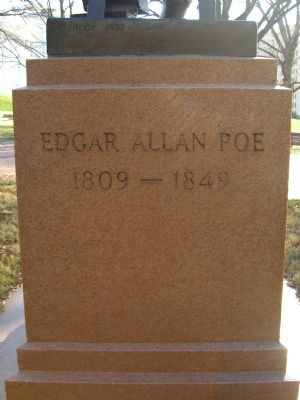