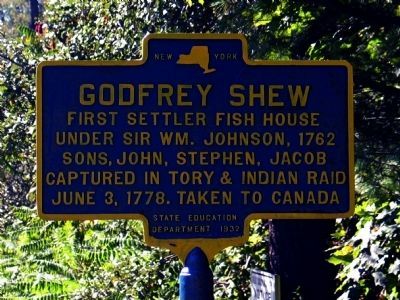 Topics. This historical marker is listed in these topic lists: Settlements & Settlers • War, US Revolutionary. A significant historical month for this entry is June 1818.

Regarding Godfrey Shew. This marker designates

Click or scan to see
this page online
one of the early settler's homes, in the Town of Northampton. There have been amazing stories of Godfrey's sons and their exploits during our fight for independence. The old Sacandaga River was a main artery from the east to the Hudson and the Champlain Corridor and many raids into the Mohawk Valley used this route through this river system and traveled by canoe. Those living along it were isolated and vulnerable to these raiding parties. Mr. Donald Sawyer wrote a wonderful book on the Shew Family titled, "They came to Sacandaga".
Credits. This page was last revised on June 16, 2016. It was originally submitted on August 25, 2011, by ELizabeth Emery of Gloversville, New York. This page has been viewed 610 times since then and 24 times this year. Photo   1. submitted on August 25, 2011, by ELizabeth Emery of Gloversville, New York. • Bernard Fisher was the editor who published this page.