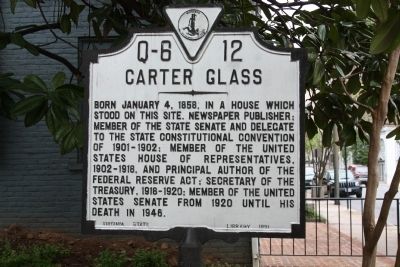 By J. J. Prats, April 9, 2011
1. Carter Glass Marker
Inscription.
Carter Glass. . Born January 4, 1858, in a house which stood on this site. Newspaper publisher; member of the State Senate and delegate to the State Constitutional Convention of 1901–1902; member of the United States House of Representatives, 1902-1918, and principal author of the Federal Reserve Act; Secretary of the Treasury, 1919–1920; member of the United States Senate from 1920 until his death in 1946. . This historical marker was erected in 1951 by Virginia State Library. It is in Central Business District in Lynchburg Virginia

Topics. This historical marker is listed in these topic lists: Communications • Industry & Commerce.

Location. 37° 24.875′ N, 79° 8.61′ W. Marker is in the Central Business District in Lynchburg, Virginia. Marker is on Church Street south of 8th Street, on the right when traveling south. Touch for map. Marker is at or near this postal address: 833 Church St, Lynchburg VA 24504, United States of America. Touch for directions. 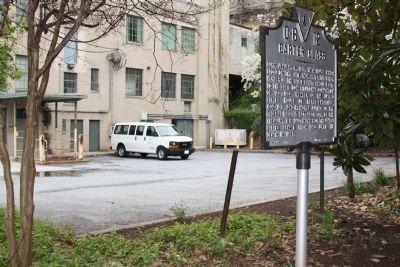 Also see . . .  Wikipedia Entry. “At the age of 22, Glass finally became a reporter, a job he had long sought, for the Lynchburg News. He rose to become the newspaper’s editor by 1887. The following year, the publisher retired and offered Glass the first option to purchase the business. Desperate to find financial backing, Glass received the unexpected assistance of a relative who loaned Glass enough to make a down payment of $100 on the $13,000 deal, and Glass became an editor and publisher.[1] Free to publish whatever he wished, Glass wrote bold editorials and encouraged tougher reporting, and the morning paper had increased sales. Soon, Glass was 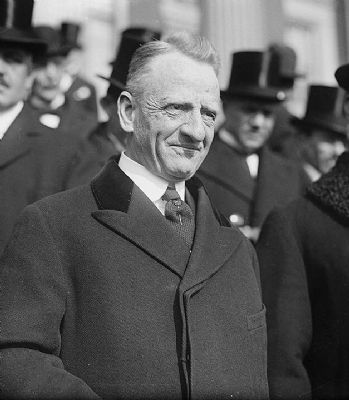 Wikimedia Commons Collection
3. Carter Glass (1858–1946)
able to acquire the afternoon Daily Advance, to buy out the competing Daily Republican, and to become the only newspaper publisher in Lynchburg. The modern-day Lynchburg News and Advance is the successor publication to his newspapers.” (Submitted on August 25, 2011.) 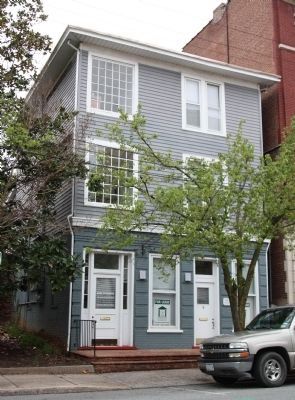