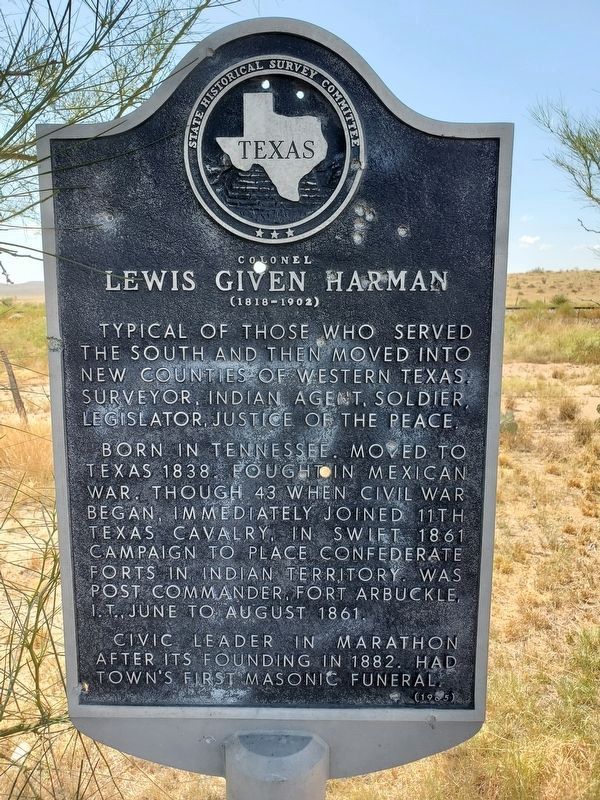 By Brian Anderson, August 31, 2019
1. Colonel Lewis Given Harman Marker
Inscription.
Colonel Lewis Given Harman. Typical of those who served the South and then moved into new counties of Western Texas. Surveyor, Indian agent, soldier, legislator, Justice of the Peace. , Born in Tennessee. Moved to Texas 1838. Fought in Mexican War. Though 43 when Civil War began, immediately joined 11th Texas Cavalry, in swift 1861 campaign to place Confederate forts in Indian Territory. Was Post Commander, Fort Arbuckle, I.T., June to August 1861. , Civic leader in Marathon after its founding in 1882. Had town's first Masonic funeral. . This historical marker was erected in 1964 by State Historical Survey Committe. It is in Marathon in Brewster County Texas

Typical of those who served the South and then moved into new counties of Western Texas. Surveyor, Indian agent, soldier, legislator, Justice of the Peace.

Civic leader in Marathon after its founding in 1882. Had town's first Masonic funeral.

Topics. This historical marker is listed in these topic lists: Patriots & Patriotism • Settlements & Settlers • War, Mexican-American • War, US Civil. A significant historical year for this entry is 1838. 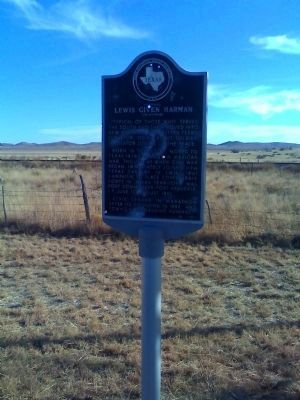 By Zacharias Beau T, January 11, 2016
2. Colonel Lewis Harman Historical Marker
View of marker facing south. To the west, out of the frame, is a great view of Mount Ord and the Sierra Del Norte Range, elevation 6,833 feet above sea-level.

Click or scan to see
this page online
Ouachita Rock Belt historical marker on US 90. Touch for map. Marker is in this post office area: Marathon TX 79842, United States of America. Touch for directions.

Regarding Colonel Lewis Given Harman. Marathon's Lewis Harman had worn the three collar stars of a Confederate colonel. Beyond the information from the historical marker, however, there are very few sources on this distinguished character.

Additional commentary.
1. Missing Gravesite of Colonel Harman
Even though the historical marker records that Colonel Harman's funeral was in Marathon his grave is not at the Marathon Cemetery. One source offers only that he was buried in Brewster County, an area the size of the state of Connecticut. Considering his rank in the Confederate Army and postwar prominence in Marathon it is peculiar that the old soldier's grave is not a known memorial. I am currently researching the colonel and in finding his grave site. Anyone 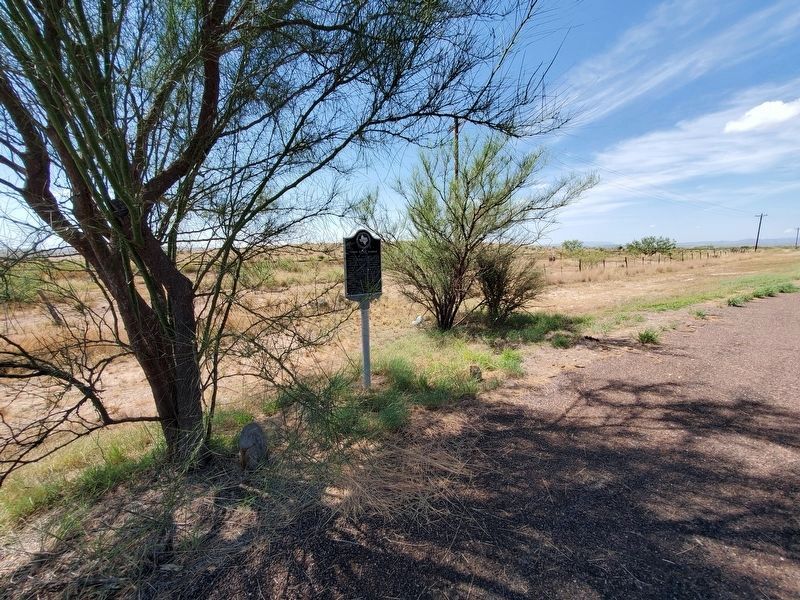