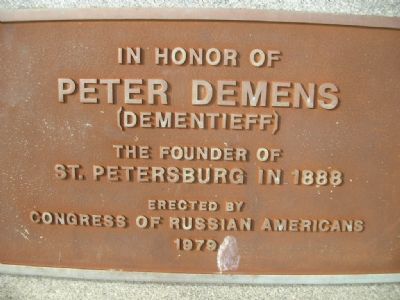 In honor of
Peter Demens
(Dementieff)
the founder of
St. Petersburg in 1888


Erected 1979 by the Congress of Russian Americans. 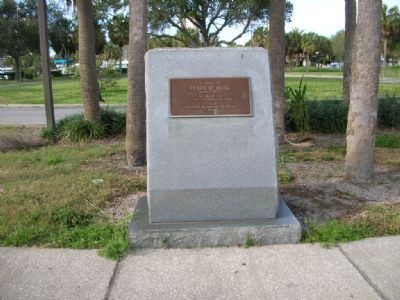 By Julie Szabo, January 5, 2008
2. Peter Demens Marker
Peter Demens was born to a wealthy family in the Tver Oblast of Russia. Demens was a well educated aristocrat who was also liberal-minded. He became a member of the Imperial Guard and later became outspoken about the Czarist regime. He left Russia following the assassination of Czar Alexander II in 1881.

After settling in the United States he changed his name to Peter Demens. He lived in New York briefly before moving to Florida and entering the lumber business. In 1885 Demens was supplying railroad ties to the Orange Belt Railway when he took over their charter because they couldn't pay him. After securing three financial partners, Demens completed the link between the lower St. Johns River and Lake Apopka. Demens then extended the Orange Belt Railway 120 miles to the Pinellas Peninsula with the help of Hamilton Disston. On June 8, 1888 the first train pulled into the terminus in southern Pinellas county with 1 passenger. The area had no official name and no real streets or sidewalks. Demens named the location of his terminus St. Petersburg, Florida after Saint Petersburg, Russia where he had spent half his youth.
Source: Wikipedia
Credits. This page was last revised on May 5, 2020. It was originally submitted on January 12, 2008, by Julie Szabo of Oldsmar, Florida. This page has been viewed 2,879 times since then and 43 times this year. Photos:   1, 2. submitted on January 12, 2008, by Julie Szabo of Oldsmar, Florida. • Kevin W. was the editor who published this page.
Share This Page.