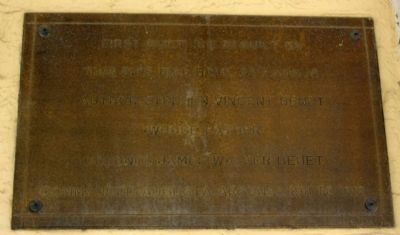 Topics and series. This historical marker is listed in this topic list: Notable Buildings. In addition, it is included in the National Historic Landmarks series list.

Location. 33° 28.546′ N, 82° 1.437′ W. Marker is in Augusta, Georgia, in Richmond County. Marker can be reached from near Arsenal Avenue near Patrol Drive. Located on Campus of Augusta State University. Touch for map. Marker is in this post office area: Augusta GA 30904, United States of America. Touch for directions. 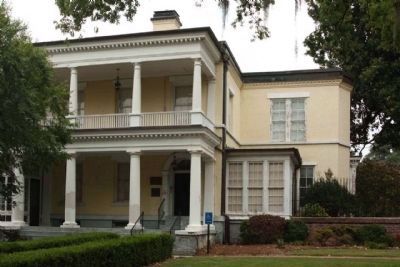 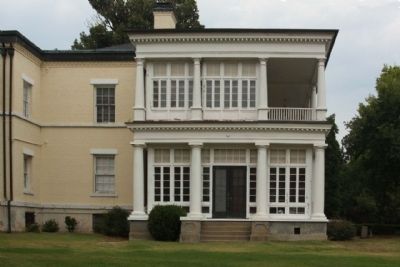 By Mike Stroud, August 7, 2011
3. Stephen Vincent Benet House south side view
a Pulitzer Prize in 1929, and for two short stories, "The Devil and Daniel Webster" and "By the Waters of Babylon". In 2009, The Library of America selected Benét’s story “The King of Cats” for inclusion in its two-century retrospective of American Fantastic Tales, ... (Submitted on September 5, 2011, by Mike Stroud of Bluffton, South Carolina.)

Additional comments.
1. Stephen Vincent Benet
was noted both 'for his poe'ttry and pro'se fiction
and was extremely popular among the reading public. As Henry Canby has
said, "It seems probable that no writer of poetry in English has- been
read by so many in his lifetime...." Although his poetry was sometimes
uneven, and much of his longer prose work unsuccessful/ at his best he
could stir the wellsprings of the American spirit with his ballad-like
poetry and short stories. "Stephen Bene't has the true gift of poetry, and
he has a scope and energy of ambition that is rare among poets in this
practical age." (Max Eastman)^ in such works as John Brown's Body, Benet
made a lasting contribution to American literature.
Stephen Vincent Bene't began living at the Commandant's House in the
second half of 1911, when his father, Col. J. Walker Benet, assumed
command 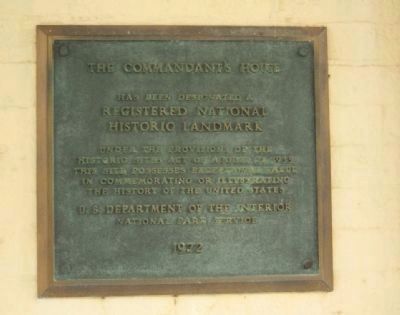 By Mike Stroud, August 7, 2011
4. Stephen Vincent Benet House National Register of Historic Landmark 1972
Also known as President's Home,Augusta College;Commandant's House;Augusta
of the Augusta Arsenal. Young Benet lived here until the autumn
of 1915, although he spent all his summers except the last in Highlands,
North Carolina. From 1913 on, he wrote intensely. During July to August
of 1915, he wrote his first book, Five Men and Pompey, a series of dramatic
monologues in verse. This work represented the young poet's transition to
artistic maturity and prefigured his technique in his most famous work,
John Brown's Body. The Commandant's House is the extant structure most
significantly associated with the career of Stephen Vincent Benet. In
addition, the house and its setting have historical significance as part
of an important early 19th -century military post.
Stephen Vincent Benet was born in 1898 in Bethelehem, Pennsylvania.
His father, J. Walker Benet, was an Army colonel and a lover of poetry and
literature. Col. Benet's influence may help to explain the fact that both

Stephen and his brother, William Rose Benet, became important literary
figures.
Stephen Benet spent much of his boyhood in Benecia, California, on
San Francisco Bay. In 1911, his father was transferred to Augusta Arsena
in Georgia. Here Stephen attended Summerville Academy and began to write
steadily, becoming a genuine prodigy. In the summer of 1915, he wrote
Five Men and Pompey, a series of 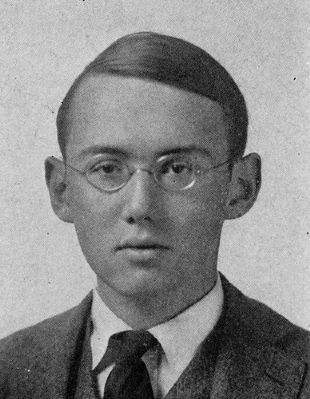 By Yale College Class of 1919
5. Stephen Vincent Benet, pictured in the college yearbook.
dramatic monologues in verse. He entere
Yale in the fall, and during the winter his work was published as a book.
A second book, Young Adventure (1918), also appeared while he was in
college. He graduated in 1919, and received his master's degree the
following year.
Throughout his life Benet relied on his writing for support, and in
his early years this income was meager. He went to France in 1920 and
again in 1921. He met Rosemary Carrol there during the first trip, and
married her a year later. During this period he worte several novels,
including The Beginning of Wisdom (1921).
In 1926, Bene't obtained a Guggenheim Fellowship which enabled him
to go to Paris to work on John Brown's Body. Published in 1928, this
epic poem made his reputation. It is a bold patriotic narrative of the
Civil War, a ballad to American greatness. It gained immediate popularity
and won the Pulitzer Prize of 1929.
His next major success was "The Devil and Daniel Webster" which
appeared in 1937. This short story was recognized as a classic of
American literature and was later made into an opera and a film. Besides
the poetry and short stories for which he is best known , Benet also wrote
for radio and the stage as well as propaganda for the government during
World War II. He was a staff reviewer for Saturday Review and a member of
the American Academy of Arts and Letters. He received his second Pulitzer
in 1943 for the uncompleted long poem Western Star. He died in 1943 in
New York, where he had lived since 1930.
(National Register of Historic Places Inventory-Nomination Form)
— Submitted September 7, 2011, by Mike Stroud of Bluffton, South Carolina.
Credits. This page was last revised on June 16, 2016. It was originally submitted on September 5, 2011, by Mike Stroud of Bluffton, South Carolina. This page has been viewed 812 times since then and 7 times this year. Photos:   1, 2, 3, 4, 5. submitted on September 5, 2011, by Mike Stroud of Bluffton, South Carolina.
Share This Page.