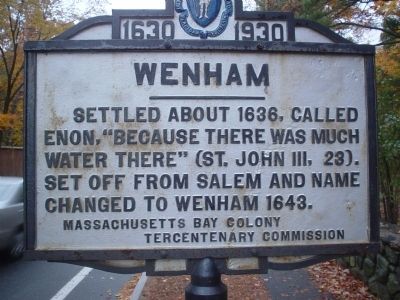 Photographed By Michael Tiernan, October 26, 2010
1. Wenham
Inscription.
Wenham. Settled about 1636, called Enon "Because there was much water there" (St. John III, 23). Set off from Salem and name changed to Wenham 1643 . This historical marker was erected in 1930 by Massachusetts Bay Colony-Tercentenary Commission. It is in Wenham in Essex County Massachusetts

Topics and series. This historical marker is listed in these topic lists: Notable Places • Settlements & Settlers. In addition, it is included in the Massachusetts Bay Colony—Tercentenary Commission Markers series list. A significant historical year for this entry is 1636.

Other nearby markers. At least 8 other markers are within 4 miles of this marker, measured as the crow flies. Site of Camp Lander (here, next to this marker); a different marker also named Wenham (approx. 0.6 miles away); This Stone Marks the Site of Peter Hill (approx. one mile away); Wenham Lake (approx. 1.2 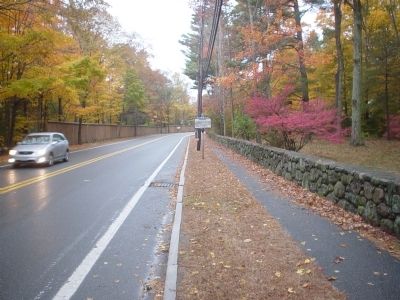 More about this marker. Sign is on a busy road, you should park in Pingree Park and not on the road.