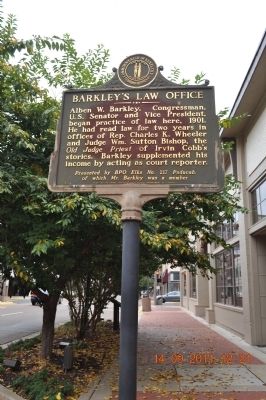 By Sandra Hughes, September 14, 2011
1. Barkley's Law Office Marker
Inscription.
Barkley's Law Office. . Alben W. Barkley, Congressman, U.S. Senator and Vice President, began practice of law here, 1901. He had read law for two years in offices of Rep. Charles K. Wheeler and Judge Wm. Sutton Bishop, the old Judge Priest of Irvin Cobb's stories. Barkley supplemented his income by acting as court reporter.. Presented by BPO Elks No. 217 Paducah of which Mr. Barkley was a member. . This historical marker was erected in 1967 by Kentucky Historical Society and Kentucky Department of Highways. It is in Paducah in McCracken County Kentucky

Presented by BPO Elks No. 217 Paducah of which Mr. Barkley was a member.

Topics and series. This historical marker is listed in this topic list: Government & Politics. In addition, it is included in the Kentucky Historical Society series list. A significant historical year for this entry is 1901. 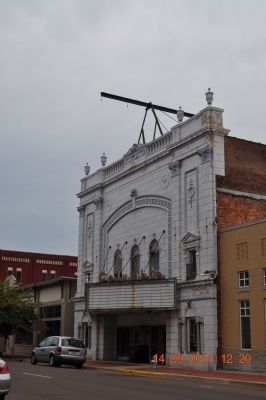