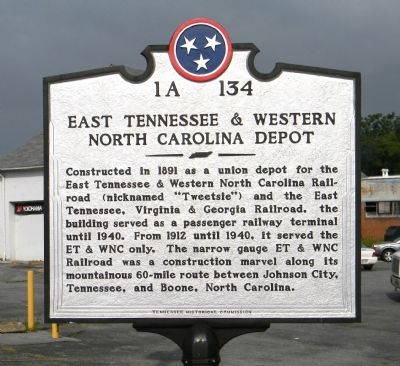 Constructed in 1891 as a union depot for the East Tennessee & Western North Carolina Railroad (nicknamed “Tweetsie”) and the East Tennessee, Virginia & Georgia Railroad, the building served as a passenger railway terminal until 1940. From 1912 until 1930, it served ET & WNC only. The narrow gauge ET & WNC Railroad was a construction marvel along its mountainous 60-mile route between Johnson City, Tennessee and Boone, North Carolina.

Topics and series. This historical marker is listed in these topic lists: Industry & Commerce • Railroads & Streetcars. In addition, it is included in the Tennessee Historical Commission series list. A significant historical year for this entry is 1891. 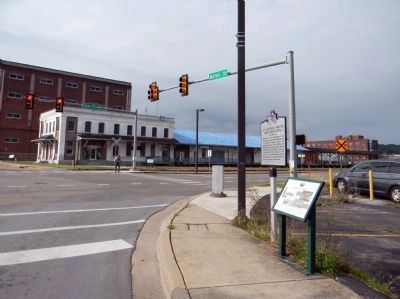 Editor’s want-list for this marker. Photos of the ET & WNC Depot (most recently a whitewashed building, housing a tire store) • Can you help?
Share This Page.