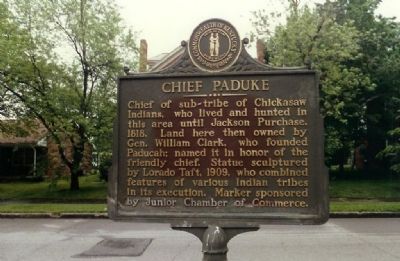 By Michael Stroud, circa June 1991
1. Chief Paduke Marker
The Jackson Purchase is a region in the state of Kentucky bounded by the Mississippi River to the west, the Ohio River to the north, and Tennessee River to the east.
Inscription.
Chief Paduke. . Chief of sub~tribe of Chickasaw Indians, who lived and hunted in this area until Jackson Purchase, 1818. Land here then owned by Gen. William Clark, who founded Paducah; named it in honor of friendly chief. Statue sculptured by Lorado Taft, 1909, who combined features of various Indian tribes in its execution. . This historical marker was erected by Paducah Junior Chamber of Commerce. It is in Paducah in McCracken County Kentucky

Chief of sub~tribe of Chickasaw Indians, who lived and hunted in this area until Jackson Purchase, 1818. Land here then owned by Gen. William Clark, who founded Paducah; named it in honor of friendly chief. Statue sculptured by Lorado Taft, 1909, who combined features of various Indian tribes in its execution.

Topics and series. This historical marker is listed in these topic lists: Native Americans • Settlements & Settlers. In addition, it is included in the Kentucky Historical Society series list. A significant historical year for this entry is 1818.

Other nearby markers. At least 8 other markers are within walking distance of this marker. Linn Boyd Home — 1853 (about 700 feet away, measured in a direct line); Fountain Avenue United Methodist Church (approx. 0.2 miles away); Gen. Lloyd Tilghman (approx. 0.2 miles 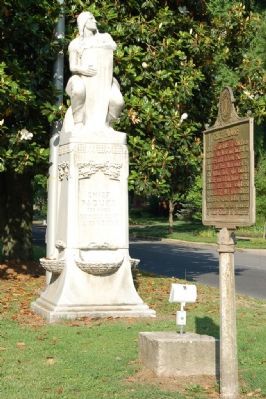 Union General U. S. Grant occupied Paducah on September 6, 1861, building a pontoon bridge across the Ohio River to the Illinois shore. Fort Anderson 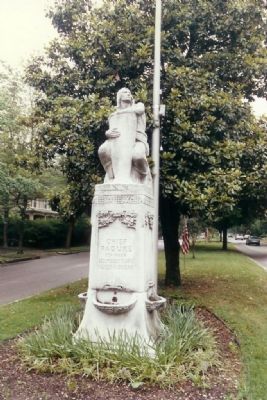 By Michael Stroud, circa June 1991
3. Monument to Chief Paduke
Chief Paduke for whom Gen. William Clark named Paducah
was built and named after Kentuckian and Fort Sumter commander Major Robert Anderson. Attacked March 25 and April 14, 1964, the fort was successfully defended by both white and black troops commanded by Colonel Stephen G. Hicks of Illinois. In the spring of 1864, African Americans were recruited in Kentucky for federal service in the "United States Colored Volunteers." The 8th Colored artillery (Heavy) was raised almost exclusively in Paducah as were elements of five other black regiments.

The organizer of the American Red Cross, Clara Barton, came to Paducah March 13, 1884, on the steamboat "Josh V. Throop" to help direct relief work during the Ohio River flood. Relief boats traveled from Pittsburgh to Cairo in the first flood relief operation of the American Red Cross.
— Submitted January 16, 2008, by Mike Stroud of Bluffton, South Carolina.
2. The adjacent sculpture of Chief Paduke
The adjacent sculpture, titled "Chief Paduke," was sculpted by Lorado Taft and dedicated May 19, 1909. It was relocated to this site on June 3, 1937. Made from Georgia marble, it stands five feet tall on a seven foot tall stone base.

The sculpture commemorates Chief Paduke, for whom the city was named. It was commissioned by the Paducah Chapter of the Daughters of the American 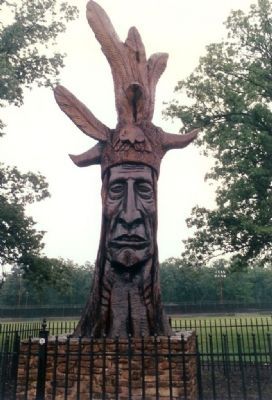 By Michael Stroud, circa June 1991
4. Nearby Hand-Chiseled Artwork
Hand chiseled in 1985 from a local 56,000 pound Red Oak to honor the Chickasaw Indians who lived and hunted in this area until the Jackson Purchase, 1818. Chief Paduke was a Chickasaw Indian.
Click for more information.
Revolution for $3,000, at the suggestion of the Paducah chapter's regent, Mrs. E. G. Boone. Chief Paduke was reported to be either from a Chickasaw tribe or a Comanche tribe. The sculpture was originally titled "Paducah Fountain" and was originally placed on the northwest corner of Broadway and 5th Street, in front of the Paducah Post Office (which might have also been called the Custom House), but was moved after the Ohio Valley Flood of June 1937.